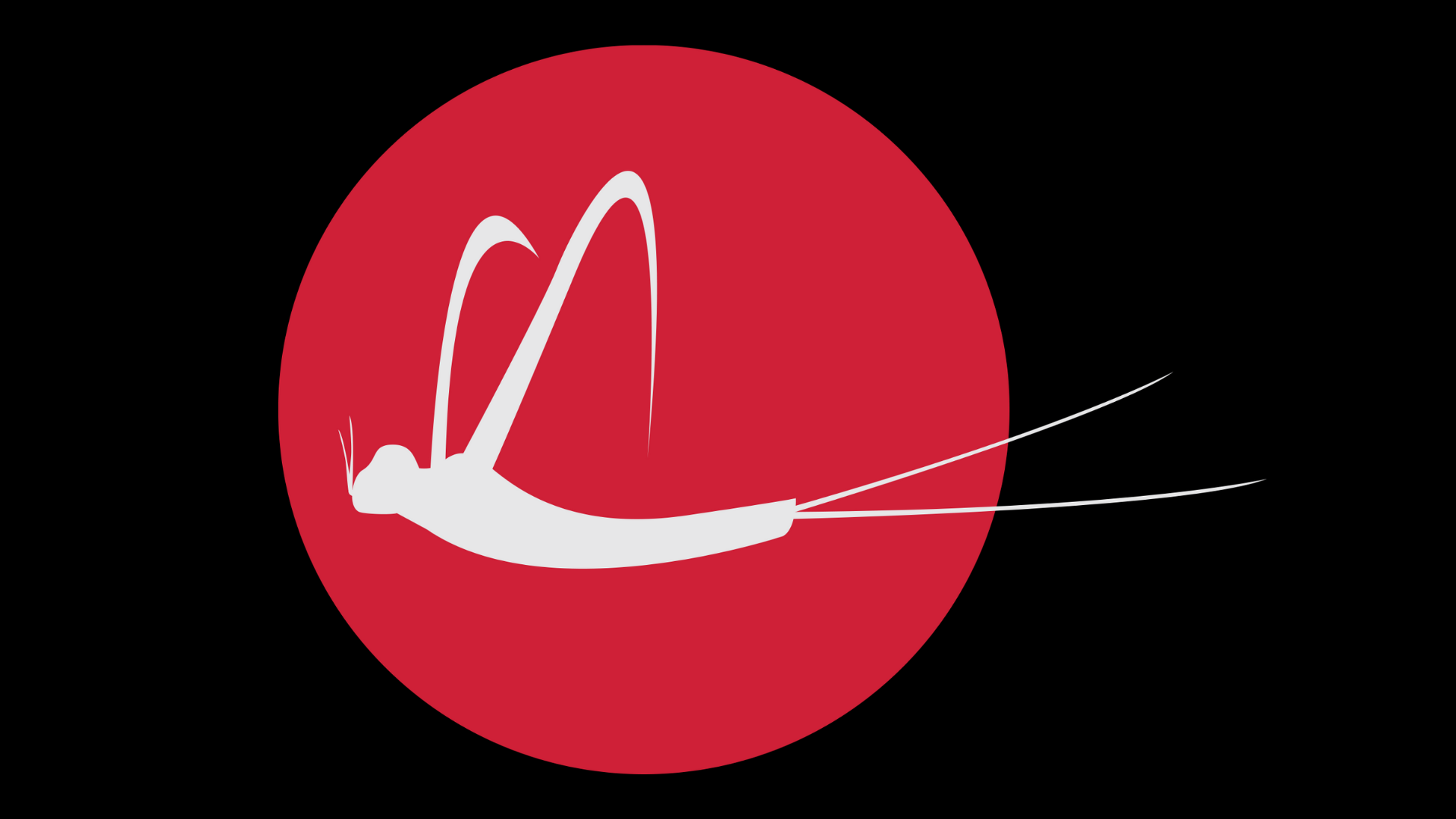 Behind the 3 Amigos of Logos

The ‘Soaring Shadfly’ gliding through the Small Town Times logo came to life on a sunny day on Manitoulin Island 40 years ago and not North Bay, where those strange creatures somehow became symbolic of my life.

Back when I was 12 years old or so, our family was on Lake Mindemoya for a week. If my memory serves correctly, we were there because one of our neighbours in Capreol spent their summers in the area. I liked three things at the time: swimming, fishing and drawing, which was a love spurred on by the illustrations in Jack London books, encyclopedias and National Geographic magazines that came every month. Remember those comic book ads where you drew a cat or dog and mailed it away for free art lessons? They rejected me several times. Undaunted, I liked to sketch things and while visiting Manitoulin I drew a really cool shad fly on my thick pad of art paper. One of my best. Bateman himself would approve. 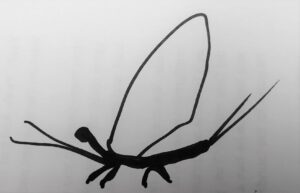 It’s been many years since then and there’s no sign of that sketch anywhere. I’ve sifted through five decades of stuff. Imagine the piles of newspaper clippings and photos collected since I first started documenting things in Gr. 5. The shad is gone, its short life reflecting a ‘real shad’ reality.

Fast forward to January 2021 in the middle of a pandemic. I’m relaunching a magazine under a new brand and I need a logo that says ‘North Bay’ after already having hit a homerun with the first magazine’s logo. The stylized Gateway of the North, quill and magazine stylized by Eric Boissonneault was award-worthy. It was a collaborative effort between Eric, my former magazine partner and myself. I drew the stick-people version and the real graphic artist made it sing.

Very similar birth of the ‘Soaring Shadfly’ with vision scratched across paper a few times before Eric found its spirit once again. At first I wasn’t sure, my mind’s eye was stuck on the forelegs being a major feature. It didn’t take me long to warm up to it though and now I love it. Doesn’t matter what anyone says, really, although I always love feedback. My buddy Ed Regan says an adjustment to the wings would help make it more recognizable, so does my good friend Brandi Cramer. But I’m not sold yet. I like the ‘Batman’ vibe and bit of mystery of what it is. Most people see shad right off the bat, and when the others catch on they like it.

Funny thing. I liked it so much I stole it from the magazine to use as the primary branding visual for Small Town Times Productions, the communication service business that actually allows me to pay some bills. Then James Savard took it one step further as he was redesigning this website. He added the Dave Dale’s Small Town Times to the ‘Soaring Shad’ and then added the red circle to bring it all together. You’ll see on Facebook I use it for my profile photo a lot. Ed suggested I make the tail stand out more and that’s when I added the black rim. I’ll probably get Jason to add that element the website version.

Meanwhile, I had to find another logo for the magazine, although I figured cross-branding as the publisher was a good audible call at that point. Eric was busy so I tried that Fivvr thing where you hire someone from a stable of artists and figure something out online. Ended up spending about $50 to go from stick men to just barely better, although it was helpful to have a sample to show a graphic artist here. 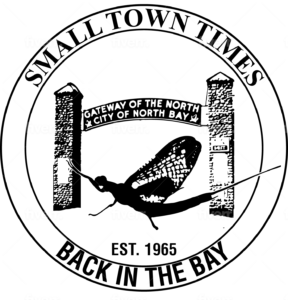 Enter Randy Palangio at Fish Tail Design, recommended by my friend Paul Smylie. He took my concept for an heritage-style stamp logo and brought it to life. Again, it’s not what I first envisioned. I wanted someone to pencil sketch a life-like shad fly walking through a drawing of the archway complete with stone pillars. Interesting to note, Eric’s first version of a shad fly for the Back in the Bay logo was rejected by me outright, yet it was very similar to Randy’s shad fly. And I liked Randy’s version of the shad fly so much it’s going to be the editorial mascot, Shad-O. The A Bit of the Bay Magazine featured 10 Shad-O cartoons I put together using a photo of two shad flies on the hood of a truck near the 503 Steam Locomotive. Not at all relevant to this story, but I was down there shooting the rusting heritage asset for the front cover of the inaugural edition of A Bit of the Bay September 2019. 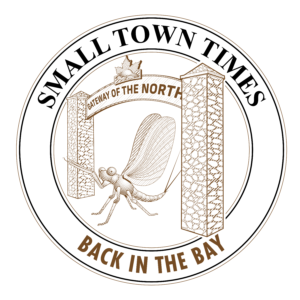 Some day I might use a train in a logo for a project. Maybe I should finally bite the bullet and just buy those art lessons, although it might be too late. My drawing hand is like a club these days, can hardly take notes and now using a digital audio recorder and paying for transcriptions to get around the issue. Probably better I just keep getting the pros to do the fine artistic finishes. I’m having fun collaborating with the pros, it’s working out fairly well so far.

My family moved to North Bay from Timmins in 1958, and then on to Ottawa in 1960. That move broke my heart, and although I’m glad and grateful for all the experiences I had down there, I always missed North Bay.

I came back with the local man I later married in 1987. All the time I was away, one of the distinct memories I kept were the shad flies. One of the first things I did after returning, was have a silver shad made by a local jeweler. It’s still one of my favourite pieces. Yes they smell a wee tad, but they don’t bite, they feed the fish, they’re an indicator of a healthy lake, they’re unusual and distinctive—and I think they’re beautiful—and their beauty was caught by the jeweler. They’re so benign—they’re born, they mate, and they die. Harming nothing and no-one along the way. How much better does a being get than that?