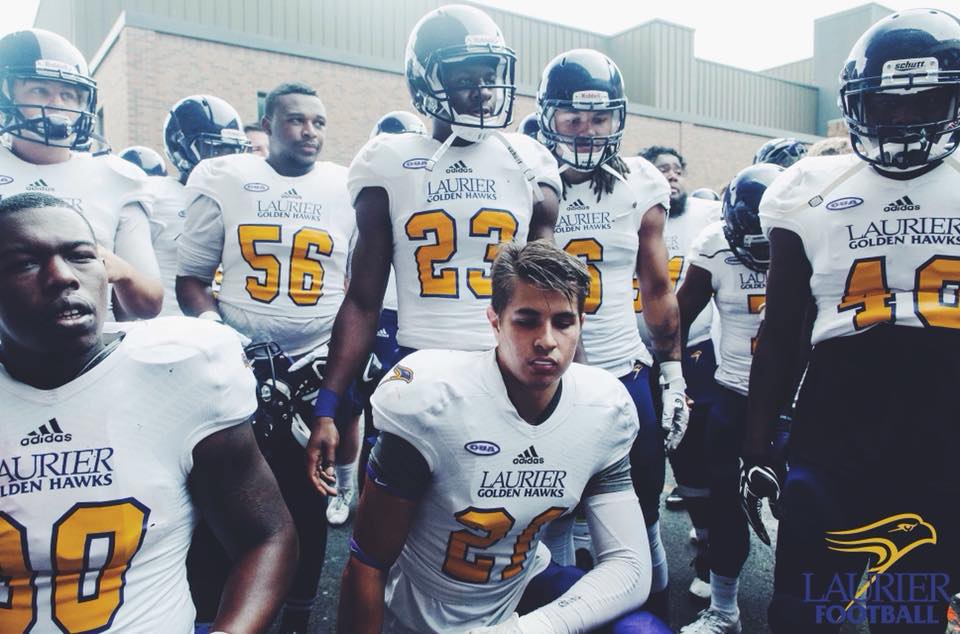 My little guy follows his heart

Dylan Dale came home for a visit the summer before the COVID pandemic to tell me about a new direction for his life. I always love seeing my son, doesn’t matter what surprise might be in store.

He stood by me when my ship was dragging bottom a few years back, not the first time I bounced off the rocks, so I owe him more than just a hollow welcome home. Good or bad, bring it on.

The kid had packed a lot into his first 21 years and I’d bet he’ll cover a lot more ground before he’s done. He’s got drive and passion. I can only admire that in a person, double for him.

This visit was another notch more interesting than the others. And that’s saying something. 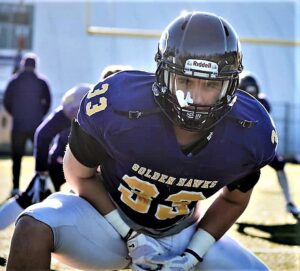 Before I begin, though, consider my position at the time. No fulltime job. Benefits were running out as soon as my severance ran out come full. Driving a 2009 Sportage worth maybe $5,000. I wasn’t doing bad on the communication gigs but they’re feast or famine. Yet I had big dreams of launching a print magazine in the midst of a digital boom. Not exactly a slam dunk. The growth plan was “merit-based” at best and a business expert might be kind to describe the performance goals as “optimistic.”

Not exactly a sturdy soapbox to start wagging my finger at anyone. Getting judgy about how my boy was planning to take on the world would have been hypocritical.

All the mistakes I made through life add up to a very humble number.

And beside, the kid was right as rain about enough other things that I had to give him some leeway. I kinda agree with his assessment, actually. Given the exact point and time, and not obsessing on how he got there, it’s clear as day he was at a crossroad in life and following his heart was the best choice.

I could quibble about pennies spent poorly, question the avoidable hits and harp about the sharp-edged realities to come. And I did put the “dad hat” on and articulate in a relatively reasonable fashion some obvious learning moments. That was said and done. 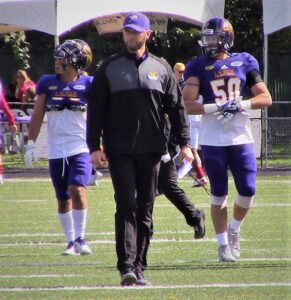 On home field in Waterloo September 2018.

Dylan understood it’s a big decision. That’s exactly why he met face to face with his Laurier University football coaches and resigned from the roster after two full years and part of that summer. I think they respected him for that at the least, and maybe also his effort and dedication while wearing the Laurier purple.

We could talk about the challenges he faced as an athlete at that level. It probably wasn’t easy getting a shoulder operation the first year. And being wounded again the second season didn’t help either.

We could look at the academic side with a similar amount of introspection.

But, as he said and I agree, it was more than those things combined. He had another dream gnawing at him from within and his heart was beating in another direction. 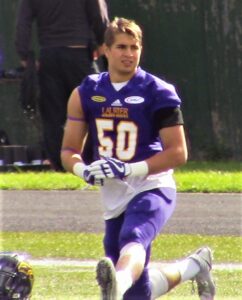 A warrior in cleats.

I know that feeling. You end up not being yourself, that’s why I’ve followed my spirit (almost) every time it called and will likely continue that pattern. It wasn’t that long ago I remembered one of the mantra’s I had back in the day: live the next 20 years like it’s your last. Why would I expect anything different from my son?

So, there ya go, he learned a lot more than any grades would show while living in Waterloo for a couple years.

His decision was to punt the gridiron game and give mixed martial arts his full attention and there’s specific training from specific people he wants to obtain closer to the nation’s capital.

He had already converted his training regimen to one more suitable for a fighter, as compared to the strength-with-bulk goals football required. He was formidable and mobile but not overly massive for an inside linebacker topping out at 6’2” and 215-pounds

On his side is well-founded athleticism after growing up playing all positions in hockey and baseball while also trying every sport. His footwork is better than many with a six-foot-two frame and he’s an anaconda on the jiu jitsu mats. Reach will be one of his attributes for sure with a 6’6” wing span and legs that go forever ending with fair-size canoes for feet. I could see him able to fight at 185 pounds while walking around at 195.

He’s employable, too, with several jobs and good references obtained before he left for university. And now he has his security licence, a goalie academy picked up as a coach and the fitness training certificate is almost complete, so there’s always work bouncing to help pay the bills. Things won’t be easy, COVID put a dent in the momentum, although he’s learning how anything worth something takes all you got. 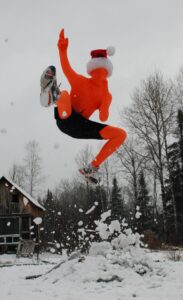 Get a kick out of life before it kicks you.

I remember the summer I was 21. Just freshly arrived in North Bay and coming off welfare on a cane. Not too many people thought I’d make a go of it. Truth is, I hadn’t shown them much reason to believe in me. There were doubts voiced by my own shadow it seemed.

Interestingly, just the other day a buddy shared with me a YouTube link to Dr. Joe Dispenza speaking about how we can program ourselves through either positive thoughts or negative ones, mapping out a looping pattern by embracing one or another outlook. It’s complicated while simplistic. Basically, by thinking certain thoughts, we create either stress on our biology that undermines our ability to heal ourselves, or make good decisions and create positive chemical reactions, allowing our body and brain to function better. Here’s one of the better audio LINKS to hear him yourself.

It explains a lot about my issues, not sure about other people. I always dwelled on the worst possible outcome thinking I’d be better prepared but often it held me back from thinking about how to make the best possible outcome materialize. I would imagine horrible things thinking that was a good way to process feelings not realizing I was conditioning myself to think and feel insecure thoughts as an instinctive reaction.

In hindsight, I quite literally held myself back for most of my life by bracing for disaster instead of planning for success.

So, all I could say then and still say it now: “Go get them kid. Be the best warrior you can be. Make all your ancestors proud. Wear with pride the Anishinaabe Thunderbird (for the Linklater side) and an Irish Shamrock (for the Dale side). Your opponents will know they’re in for a good fight.”

Always know I’m in your corner. Come home anytime you need a warm welcome, food and a safe place to prepare for whatever next step you’re taking. 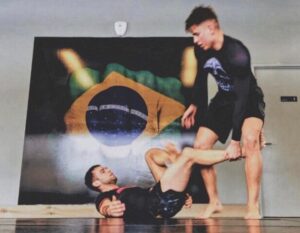