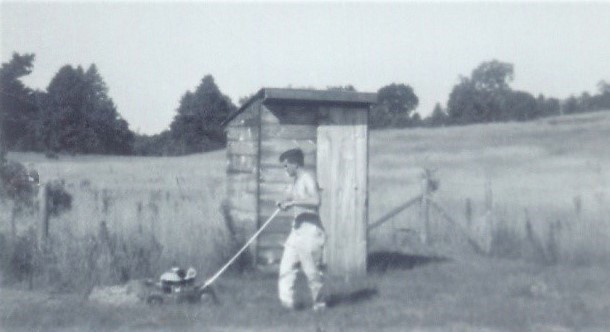 Oh crap! Some prose about the old commode

It’s funny what photos remain when people are long gone. My late, older brother captured this moment in the life of my late father. It may seem normal now to have dozens of recent photos on your phone of seemingly random events, but will they still be on your phone 50 years from now? I probably have a bunch of accidental screen grabs that leave me feeling somewhat perplexed within in the next three days or so. I’m hesitant to even check, as that rabbit hole will use up the rest of the afternoon.

My brother took this snapshot in time when he was about 12. Cheap camera. Black & white film. Had to pay to get it developed. My father, then about 34, was likely unaware he was being photographed. If he saw the printed photo, he was even less likely to give it much attention. Maybe thought, “That kid sure is weird. Maybe the younger boy will be less strange.”

Nope. The younger son looks at the photo and thinks, “That is the oldest known photo of the cottage outhouse. How exciting!”

I remember it well. Two-seater. One hole just slightly larger than the other, whether by design or slip of the jigsaw. Low maintenance. Just throw a half-shovel of lime into each hole once a year. Old wine bottle with a candle for light. Sometime in the late 70’s, I cut a crescent moon-shaped hole in the door for a little daylight.

Do I have fond memories of using the outhouse? Dark and dusty, it seemed like a place where spiders and snakes might actually enjoy living. Did I ever see a snake inside? Does that matter when you’re sitting there worrying why you’ve never actually seen a snake that you’re certain would love the damp darkness below but definitely not appreciate what you’re about to do? Nasty, vengeful, imaginary serpent.

50 years later, I’m the owner of the cottage. The outhouse remains, but it’s been a long time since the probably fictional snakes have been disturbed. I think the red squirrel (AKA “Squirrel Camembert”) might be stashing some seeds in there, but he hasn’t moved in, or even tried to flip it for a modest profit. (It’s a missed opportunity. Chipmunks are lousy negotiators and seem a little intimidated by Mr. Camembert.) 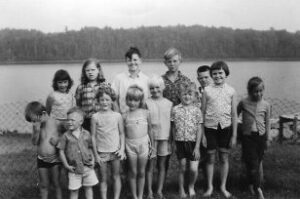 The backyard biffy’s functionality was replaced by a septic system. No more moonlight strolls or running through the early morning rain. Since the 90’s, there’s been running water, a luxury that one could never imagine when looking at the place in the 60’s. The water is pulled from the river, through black poly pipe that’s rolled up and hung from a sawed-off tree branch each winter. When I remarried in 2008, we spent our honeymoon renovating the bathroom. Don’t tell me I don’t know how to show a girl a good time. Gone was the $5 pink toilet and $15 shower stall, both purchased at yard sales, though the $25 water heater remains, now on its third element and fourth thermostat. By real (non-Muskoka) cottage standards, it’s evolved into a pretty comfortable little room.

But there’s a dark side to progress. Visitors don’t see how the sausage is made.

Ok, maybe, I should re-think that last sentence.

We all know that water flows downhill. However, a satisfying flush at the cottage needs to eventually make its way almost a hundred feet up the gentle slope of the backyard to the weeping bed, where it grows the finest grass on the lot, favoured by both white-tailed deer and wild turkeys.

Getting it there is the stuff of nightmares. Just beyond my septic tank, nicely nestled in the ground and merely a few feet from the bathroom window, is a small wooden cover, with an electrical cord emerging from a buried plastic well. Two things lie hidden below this handmade lid of pressure-treated lumber. A pump and something called effluent. You don’t want to know what effluent means, but it’s not a fancy way to say you’ve learned a new language.

(Oddly, the cat really enjoys sitting on the lid. It’s warm and the pump comes on occasionally, making the lid vibrate ever so slightly. Smells like “Dad”.)

I am currently on my fourth sewage pump, formerly my lucky pump. Bought on sale when I mistakenly thought pump #3 was on its last legs, then kept on a shelf for three years, in case of emergency. It was a comfort and a talisman, just knowing it was there, bringing me luck.

There were occasions when a good cleaning was sufficient, thus avoiding a full replacement. To do either required me to lie face down on the ground, arm nearly shoulder deep in the hole to disconnect the discharge pipe from the pump, so that the malfunctioning and messy mechanical device could be raised into the sunshine. Or rain. Usually rain. No matter the weather, I always drop the nutdriver into the effluent at least once and have to go blindly fishing for it. Did I mention that the well is full? After all, the pump isn’t working. I’m not experiencing a “best case” scenario. The entire process is done with my face turned away from the hole. (You don’t make that mistake twice.) Getting the pump loosened off the pipe takes some vigorous back and forth…sloshing.

Interesting to note that I installed the “lucky pump” in the early spring of 2020, as the pandemic began to spread across the globe. The pump’s slightly unusual design required some extra effort to install and prolonged exposure to the effluent. As a result, I may actually be immune to Covid-19, and just about every other disease known to science. 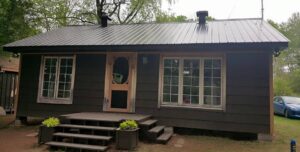 When I look at the photo of my father, I think that life at the cottage was definitely simpler then. Progress brings both comfort and complications. It’s a good reminder that there’s a cost for everything. For me, I made the decision to keep the grass cut around the outhouse, and do the dirty work necessary to keep the dirty water moving – like progress – onward and upward.

But there are no photos capturing my dirty work. I’m inevitably alone when I do that thankless task. It’s likely for the best. It’s solitary work for good reason. A full water heater and a fresh bar of soap is a must immediately after the lid goes back on.

And later, a well-earned and hopefully nightmare-free, sleep.