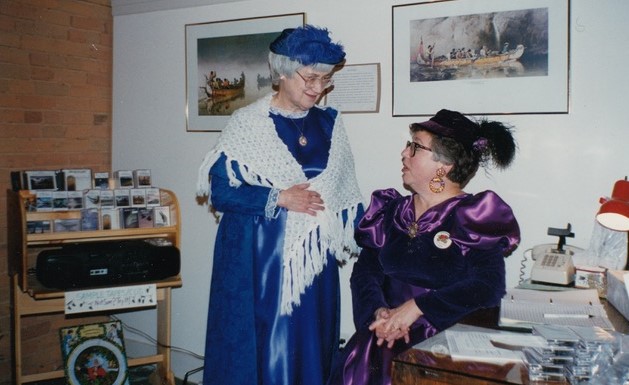 Getting off the bus on Lakeshore Drive, walking down Riverbend Road and then the long driveway to the North Bay Museum was beautiful during the autumn of 1980 when I first began.

The building, you may remember, was originally a two room school house. The Museum took it over about 1972. It flourished there until 1993 when the collection was moved to Main St. West, (beside Mayne Travel) for a couple years.

However, getting back to that long walk down the driveway… During all seasons while on River Bend Road, Mother Nature generously surprised me with her wonders.

During the spring of the year, what an absolute delight it was to listen to the black and white bobolinks singing on the utility wires. They sang so beautifully until someone cut down a lot of the little trees in the area, then they all disappeared.

Leaving the Museum one afternoon to catch the bus home, I was just rounding the corner onto the driveway when there was a huge BANG. Apparently, the ditch that ran along the wire fence was home to a large bittern and I am not sure who was the more frightened – him or me – as he shot off.

During the summer on coffee breaks, we enjoyed watching the barn swallows building nests under the eaves with dabs of mud – until the exterminator guy said he had to knock them down because all their little nits and things would creep into the Museum where it was nice and warm. So down they came along with a hornets’ nest at the side of the building.

Then came the time to change the sign at the end of the driveway which showed the Museum dates and hours. I carried the new sign board down with the intention of standing on the cross bars over the ditch, which I discovered were already taken up. A huge bull frog, which had no intention of moving, was basking in the late afternoon sun. So I gingerly stepped around him and managed to change the sign without disturbing him.

But before this traumatic event took place Joyce O’Halloran and I had enjoyed a wonderful spring of school tours where we introduced youngsters to the wonders of the Nipissing Room. That’s where we told the story of transportation on Lake Nipissing from the very early dugout canoe of the Indigenous Peoples to some of the sad remains of the John Fraser, that sank behind the Goose Islands, and The Ganton D. This marvelous exhibition had been put together by the former curator Freda Barrett along with Nipissing University professor Bessel Van den Hazel and summer students.

School children also enjoyed the Pioneer Room where they learned of blacksmithing, cooking and housekeeping in olden times, as well as the story of John Ferguson, the acknowledged founder of North Bay, in a recreation of what his living room may have looked like.

Hanging on the wall in the hallway was the amazing exhibit from the Royal Ontario Museum the children were busting to see – the Parasaurolophus dinosaur. But he was a good guy, a herbivore living in the Cretaceous period in North America, and stayed with us all summer. He was just one of the many exhibits the Museum received from the ROM.

Freda had also instituted Collectors and Pioneer Days which we continued throughout our sojourn on Riverbend Road.

These were always extremely popular days and brought hundreds of people to outside and indoor exhibits. Soon, we hope to visit the current Museum at the former CP Rail Station and go through the scrap books we kept and scan the pages for stories and photos to show you.

At home, I found a few photos of Joyce and I having a brain storming session with a couple of wonderful summer students, Joyce and I dressed in our finery, probably from Gladys Murphy’s costume collection after we had moved the collection to Main St. West. This was on opening day. I finally retired from the Museum in 1994 but Joyce continued to volunteer at the Museum for many more years.