East Ferris is cashing in on its extra gas tax funding to repave a longer section of Lake Nosbonsing Road this summer. But the addition of shoulder lanes for cyclists and pedestrians will have to come later when ‘active transportation’ funding becomes available – and if Callander gets onboard for its section.

The tender for a 2.4-kilometre road resurfacing project between Astorville Road and the former CN rail line is going out this week with an April 20 deadline following a special meeting of East Ferris council Wednesday. Municipal engineer Antoine Boucher estimates the cost to be just north of $800,000 while chief executive officer and treasurer Jason Trottier said they have funding in place to cover it.

Boucher and Trottier said they want to get the tender out now to get in the construction schedule queue and better pricing with Deputy Mayor Steve Trahan, public works committee chairman, saying the cost for everything is rising by the month.

Boucher said paving the shoulders would add about $170,000 to the project if it’s done at the same time but noted it would be a path to nowhere at this point. He said the East Ferris section west of the former CN railway line and Callander’s 1.2-km section to Wasi Corners doesn’t have paved shoulders.

Discovery Routes photo in the Corbeil Cycling Tour section of its website www.discoveryroutes.ca

Boucher also said his estimate of $71,000 per km is only for the price of asphalt with the crews already there for the road project and the cost would be higher if done as a separate ‘retrofit’ project.

Mayor Pauline Rochefort said paved shoulders is a high priority for residents, as noted in the community safety and wellness plan. She’s chairing an active transportation committee just now forming to meet for the first time May 3. It’s coming under the parks, recreation and culture committee chaired by Councillor Rick Champagne.

Recognizing the movement is not quite in parallel with the time-frame of the repaving project and available funding, Rochefort said they can explore ways to move forward as united communities. She noted that Callander is in a similar mindset with a paved shoulder concept implemented when the Hwy. 11 B section between Hwy. 94 and Wasi corners was done last year.

Councillor Terry Kelly and Champagne supported getting an idea on the pricing using this tender by asking for a paved shoulder option as a costing exercise.

That would give them and Callander an idea what they’re looking at if they join forces on a separate funding application. Kelly said it would give both communities a better position to capitalize on the growing ‘bike tourism’ industry.

Contacted after the meeting, Burke said the two communities are heading in the right direction when it comes to paved shoulders on primary roads for cycling with opportunities for more.

“East Ferris and Callander have shown remarkable foresight, safety awareness and responsibility in adding paved shoulders to their major cycling routes,” he said. “There are certainly other very scenic loops, which could be added, as circumstances permit.” 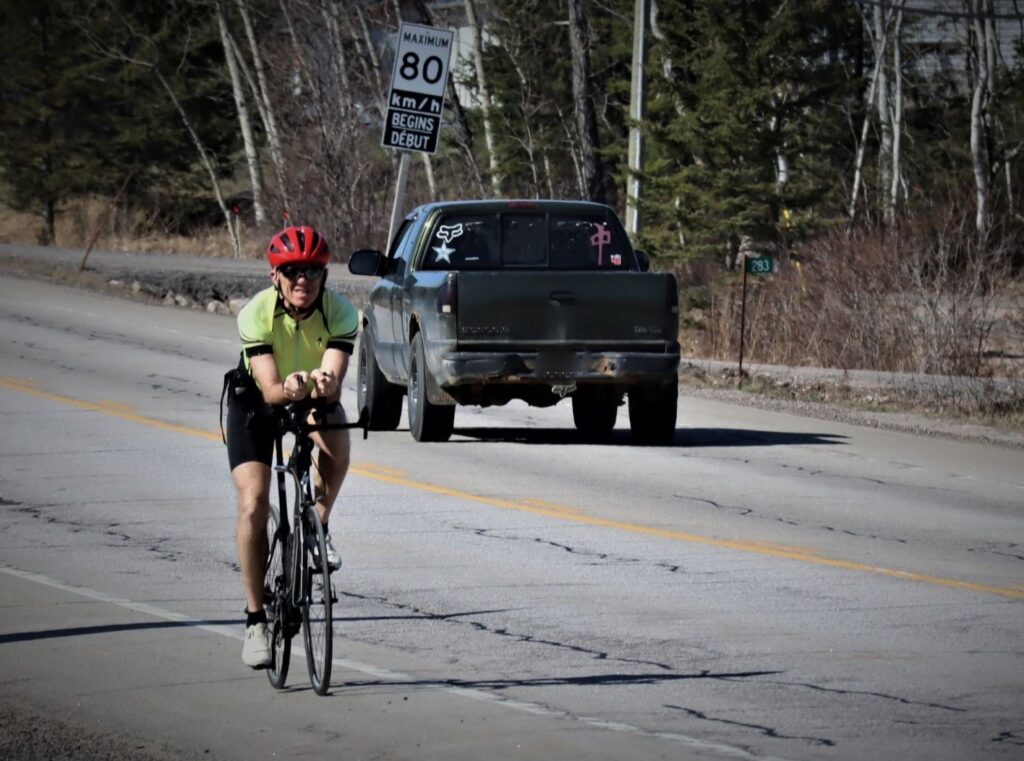