Airport memories soar across the decades

When moving to North Bay from London, Ontario, in 1957 one of the first places Dad took us to visit was the North Bay Airport. The Department of Transport had begun to construct it two decades earlier.

Years later our own family always attended the air shows, along with thousands of others. But I remember as the show became even more popular, we lined up for the shuttle buses that trundled up Airport Hill. We eagerly awaited to see static displays and a powerful variety of planes that roared and soared to thrill the crowds.

One year the Air Cadets put on a magnificent glider display to the music of Born Free, swooping among the fluffy white clouds dotting the blue sky. This brought many a tear to the eye.

When Peter and I moved 26 years ago to under the flight path of incoming planes, we soon came to know the schedule and sound of the Air Canada flights. These flights were extra special when they mysteriously appeared through fog or low clouds. 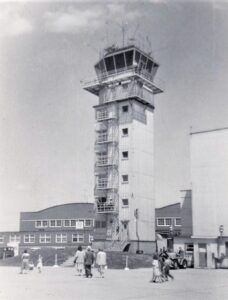 Photo taken by Pam Handley at the North Bay Airport in 1957 with a Baby Brownie. It was renamed the Jack Garland Airport in 1964.

Before COVID-19 struck, all sorts of planes came and went over our rooftop and quite often when I heard a different sound coming, I would dash outside with my camera to try to snap a photo and email it to our son in Ottawa for identification.

One day the Prime Minister’s plane came, maybe for repairs at the Voyageur Corp. shops. We used to see huge Hercules and passenger jets gliding in to practice their touch-and-go’s. Then sometimes the powerful CF-18s screamed overhead then again slower the next time around to prepare for landing. And sometimes the Snowbirds stopped by for refueling – what a treat – our own private air show.

Even though Air Canada is, hopefully just temporarily, not flying these days to and from North Bay, there are still a number of planes coming in over our rooftop. Just yesterday four planes came over in quick succession, a Hercules and little Cessnas. Helicopters to and from the hospital and sometimes ones on firefighting missions regularly thump overhead.

The airport must stay open even without Air Canada’s regular flights. I realize this is all from a purely personal and maybe a somewhat romantic point of view, but I have always loved planes, having flown quite a few times across Canada and overseas.

Back in 1988, when I was the curator of the Museum on Riverbend Road, and Air Canada was celebrating its 50th Anniversary in North Bay, Jim Albeartie, then the Airport Manager, invited many of us to fly in a beautiful 1938 silver Lockheed L10-A, over our beautiful City of North Bay. The flight was piloted by Stan Chandler who presented his log book and photo to the Museum afterwards – what a wonderful surprise. 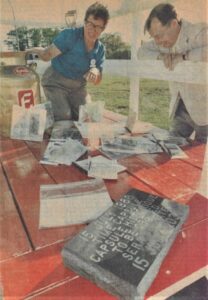 A time capsule was buried to celebrate the 50th anniversary of Air Canada at the North Bay Airport in 1988. Pam Handley, left, and North Bay Mayor Stan Lawlor in this Nugget photo.

Another part of the 50th anniversary celebration was the filling and burying of a time capsule. I wrote to about three dozen organizations in the City inviting them to donate items for the capsule. Just a few of the donors included: • The Nugget ran a contest for input from the North Bay Community, two winners were: Donna Letcher, who donated a paper dollar bill, a shad fly, copy of City Budget and 1988 phone book; and Bill Caesar of the Nipissing Coin Club, who donated 1988 coins.

Probably 200 or so citizens made their way up Airport Hill on that beautiful sunny day to witness the burying of the time capsule and the flight of the 1938 Lockheed affectionately known as The Silver Bird. I like to think it was the same plane that landed in North Bay when the North Bay Airport opened in the Fall of 1938.

Our son took a polaroid photo of the crowd gathered for the occasion and popped it into the big silver painted milk container before the lid was slammed down, sealed and buried. The good news is, if and when I live to be 100 years old, I get to help dig up the time capsule at The North Bay Jack Garland Airport. 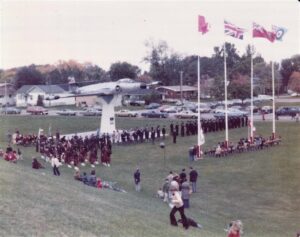 This photo was taken at Lee Park where the CF-100 stands, possibly a Battle of Britain ceremony in the mid-1970s.