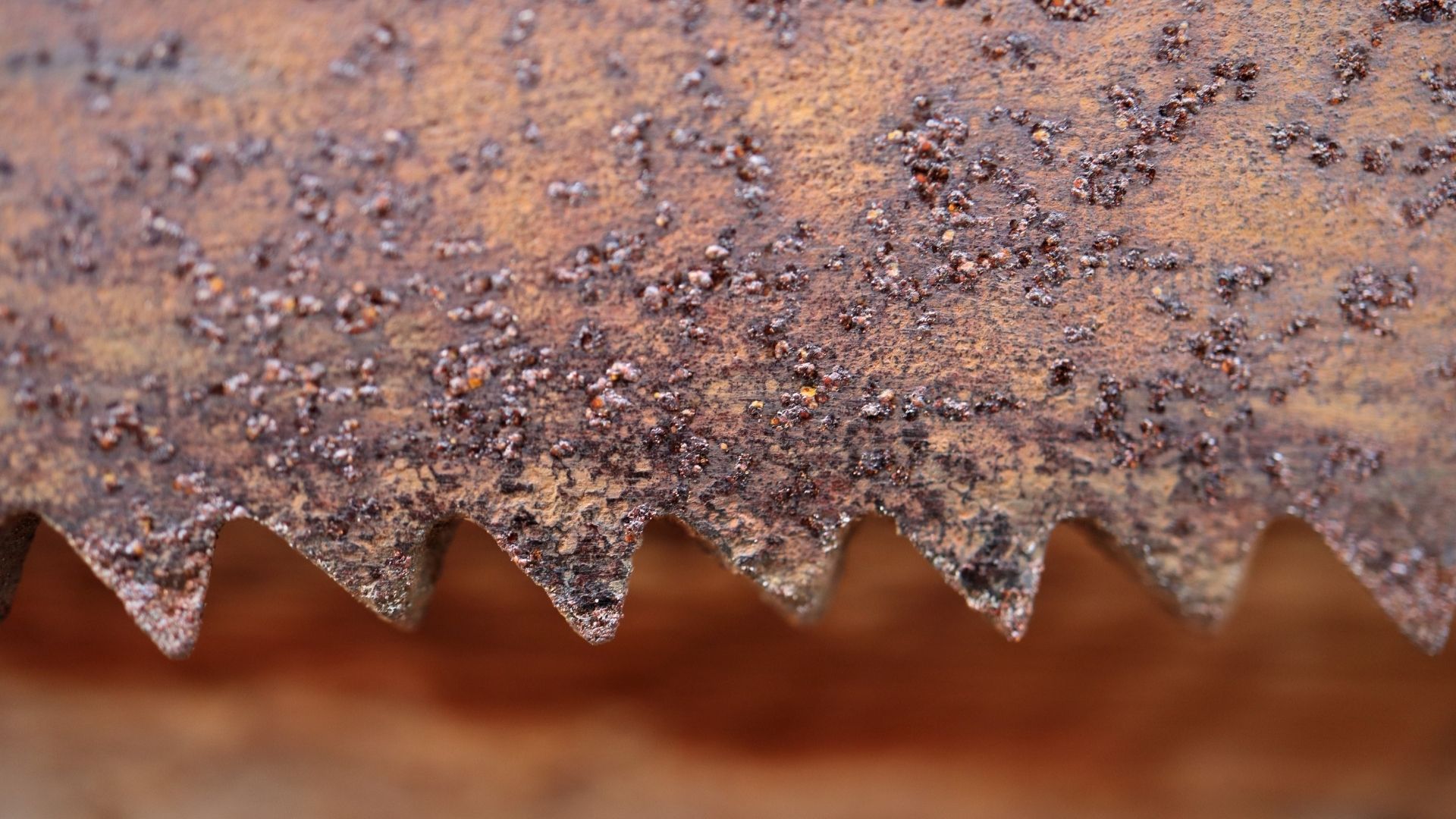 I hate rust. It triggers me.

When I pull up behind a car at an intersection or while parking, and I see rust on the trunk lid, I involuntarily shudder. I’m a little queasy right now just thinking about it.

Rust brings back memories of despair. The old days of putting a key in the trunk lock, throwing in hockey equipment or groceries or a misbehaving child and seeing that first bubble in the paint. You immediately know that bubble will grow. Then it will flake. Soon, you’ll see it appear.

No, I did not really throw one of my children into the trunk, but I’m writing this on April 1, so I might be lying about that. I guess we’ll never know.

When you’re a young parent renting your home, your car is probably the biggest investment you have. Rust is bad news. It’s likely the beginning of a steep decline in your investment, like the high school stock market exercise where I put my imaginary $10,000 into Dome Petroleum. It was an early sign that my portfolio was likely going to consist of four wheels, sketchy tires, and a Coleman cooler wedged behind the driver’s seat to keep it from falling into the back. 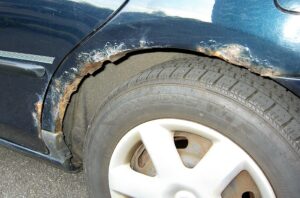 I bought my first brand new car in my forties. I had about 25 years of vehicles that ranged from previously enjoyed to recently despised, the first being a 1972 Lemans that my father was stuck with after someone stiffed him on the repair. It taught me the difference between quick and fast. Zero to 50, you knew what G-force meant. From 51 to approximately 73, you developed a lifelong habit of carefully considered passing.

Plenty of vehicles are fuzzy memories. They did the job and moved on when they had nothing left to give, like the co-worker whose retirement card you debated signing – I remember them, but I really have to stop and think about their names. 1978 Chevy Nova? Was he the guy who worked in accounting? I’ll sign the card, but I’ll take change out of the donation envelope. Twenty dollars for Chevy Nova just because I sat beside him once during a staff meeting? No way.

There were not one, but two K-Cars. Not as “reliant” an automobile as you were led to believe. There were two Toyotas, the second of which was written off by Daughter #1 and replaced by a 1998 Mazda. There was a sexy and fast Pontiac Grand Prix (with a T-roof, leather interior, and 301-4-barrel engine). But it was sacrificed to the God of Fatherhood after Daughter #3 was born and replaced with a nine-years older huge four-door Mercury Marquis nicknamed The Coffin.

In a strange Karma-like twist, Daughter #3 fell out of The Coffin. Shortly after graduating to a booster seat, she dropped something, unhooked her car seat buckle and opened the door, just as I turned right from a stop sign. I looked to her mother and asked, “Did you hear something?” Daughters #1 and #2 didn’t say a word. Did they see her as someone crowding their backseat turf? Maybe. Daughter #2 didn’t have to sit in the middle before #3 came along and #1 just likes her space. I hit the brakes, ran back and scooped her up, right in front of the very surprised driver that was following me. I may, or may not, have thrown her in the trunk. That’ll teach #3 to make me give up my one cool car.

Later came a Dodge Caravan. Daughter #2 fell out of that one, as I completed the left turn into my driveway, though she swears it never happened. Head injuries will do that.

We had such optimism, and for us the mini-van was a big step up. My mechanic asked me what engine it had, “The 2.2 or 2.6?” When I answered proudly that it was the larger one, he looked so sympathetic. “Oh, I am so sorry for your loss.” It was such a disaster that we named it Mother. 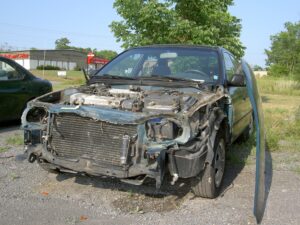 Speaking of Mother, there was the Geezermobile, purchased from my own mother, a few years after she had bought it for herself when she learned that my first wife and I had been turned down for the loan to purchase it.

Buying it from her was a low moment, but certainly not rock-bottom. That came a couple of years later when the engine fell out as I was backing out of the driveway. The steering wheel suddenly seized for no apparent reason. My first thought was that a front wheel fell off (Yes, that happened to me before too), so I got out and did a walkaround. Everything looked fine and the engine was still running. I looked under the car. The engine was about three inches off the ground, belts stretched to the breaking point, after one of the motor mounts had rusted away.

You can’t run from it. And if there’s rust, there’s likely something mechanical going on too. It’s all decay and it’s only a matter of time.

My first Toyota towed minivan Mother back from the mall parking lot after its starter had failed. I was unemployed. I sold $40 in old hockey equipment to buy a $35 used part and, using Toyota repair manual that wasn’t even the same year as the one I owned, figured out how to install the starter on the minivan. I was the most surprised when it started.

There were so many incidents over the years that I feel like I’ve blocked some out: The driver’s window that would suddenly drop down inside the door. Holding a candle under the windshield when the defrost fan quit; driving two hours to a hockey tournament with no heat. Three blown head gaskets. Stopping every 20 minutes to spray ignition dryer on wires one perilous Christmas Eve trip. There are just too many to recount.

And very rarely, moments of laughter at how ridiculous it all was. Like when my daughter’s friend was sitting in the back seat with a still-warm muffler on the floor at her feet, minutes after it detached and shot sparks along the pitch-black highway. In a moment of optimism (when you’re broke, hope is all you can afford) I stopped and retrieved it, just in case it could be re-attached. A few minutes after we resumed driving, her voice from the back, “A part just fell off the car and no one is going to say anything about it???”

My first post-divorce car was a well-used Ford Tempo named Earl after the bear in John Irving’s Hotel New Hampshire. Like the fictional former circus performer, it was the colour of shit and death, and on its last legs.

Earl’s clutch linkage was literally held together with metal filing cabinet rails and hose clamps, an upgrade from a door closure rod scrounged from parts in a hockey arena’s Zamboni room after it fell apart in the parking lot.

I was driving Earl on the freeway, passing someone south of Montreal, when the throttle stuck on full. I kept passing cars until I got a good gap in front of me, hit the clutch, turned off the key to stop the screaming motor and drifted on to the shoulder. A quick spray of lubricant around the carb and I was off. These are the moments that years of watching cars rust prepare you for. I had officially reached the point of numbness sometime after the car went over 130 km/h. Focused on the solution, heart rate below 70, just a grim sense of “This again.”

I wish it was easy to say that rust builds character, but that doesn’t feel right. Rust doesn’t build anything. It just exposes wear and tear. Rust strips you down. I learned to live with rust because I must. I had no talent to fix my cars nor money to replace them. Rust was the beginning of the end of each one in that long line of my least favourite cars. Most of them were towed to the wrecking yard and replaced with something that would soon suffer the same inevitable fate.

Unlike those cars, I survived. It made my first new car incredibly significant. I truly appreciated the moment.

My current car is rust-free but I remember my old foe well. So, if you have some rust showing and you see a guy at your car window offering you a hug, it might just be me. I’ve felt your pain.