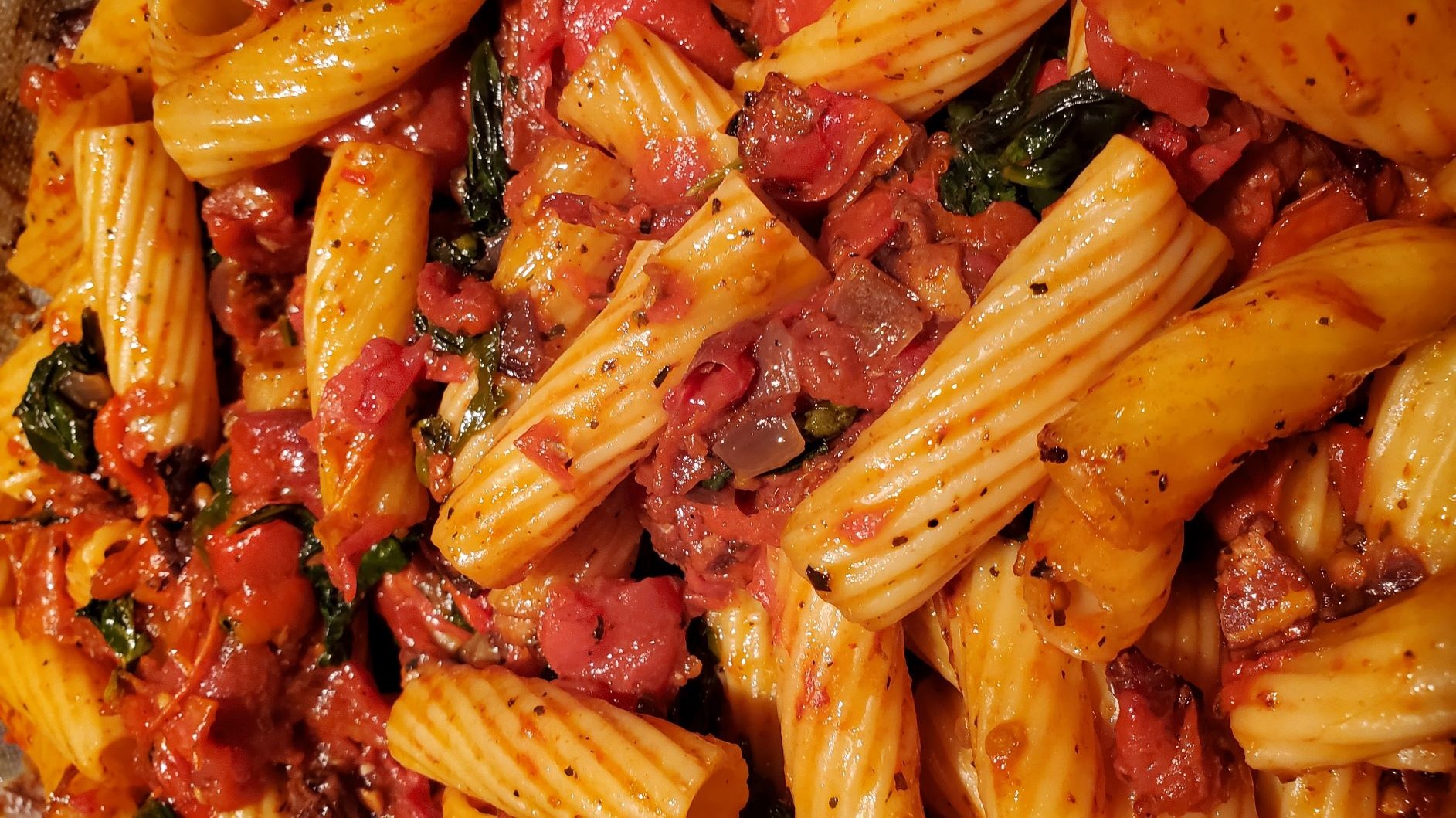 Triggered by something in your pasta

I sometimes make my wife cry. Something wells up inside her and I see the lower lip quiver, the eyes beginning to moisten. She fans her face as the tears threaten to flow.

“I assumed it was the garlic,” I replied.

It was the noodles and meatballs that triggered the teary-eyed confession. She was on the I-stopped-counting-weeks-ago straight day of work and it was late in the evening. She needed some comfort food. The meatballs came out of the freezer – a pork and beef batch I had made weeks earlier, and the canned pasta sauce was bolstered by sauteed mixed peppers, red onions and Russian red garlic. Not fancy but made with love and some well-tuned knowledge of who would be eating across the table from me.

I know what she likes.

I recently answered a question on social media, on what advice I would give a 20-year-old.

1. Learn to cook.
2. Learn what the people you love like to eat.
3. Learn to get really good at cooking those things.

Other people were providing philosophical or financial advice that was likely more profound (and lucrative) than my wisdom, but I stand by it.

I grew up in a house where good cuts of meat suffered a dismal end. Under-seasoned, over-cooked, roasts and “hard-as-this-table” pork chops. If the butchers had known the abuse my mother would inflect on them, they might have saved my father a few bucks by giving him cheaper cuts. My mother lacked both skill and imagination, and yet always seemed surprised when my father responded to the question, “Well, how was it?” 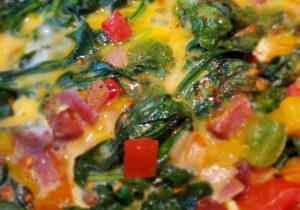 I was likely well into my twenties before I really knew what properly cooked pork tasted like. And I still have to suppress a gag reflex when I think about canned peas.

My father was the better cook, but Sunday breakfasts of bacon, with eggs cooked in the grease, was the only meal he’d make at home. While we must have had a BBQ at home, I only associate him manning the grill with Sunday afternoons at the cottage. Big steaks, hot dogs and burgers, done on a simple charcoal grill, briquettes lit with a good dousing of lighter fluid. A match tossed followed by the familiar “WOOF” of ignition!

Friday evenings for my parents were reserved for dinner out. Steak and potatoes, a rye and Coke for him. Likely hot chicken sandwich for her.

Weekday lunches at his garage were takeout from a nearby diner – garlicky hamburgers and wedge fries, which I would pick up for him and his employees when it was lunchtime at school. Of course, the reward for my service was lunch, and a few minutes hanging around with him.

My path to the kitchen was a meandering one. As a teen, I knew my way around the kitchen and a BBQ, but I kept it pretty simple. KD and burgers. A can of soup and a whole sleeve of crackers. No seasoning, no flare, but it got the job done.

Married at 21 and with three kids by 25, the next years were a blur. Good cuts of meat and fresh produce were luxuries we couldn’t afford. We planted a vegetable garden and made do with several years of stretching the grocery budget. Meals were inexpensive and generic enough to hopefully be acceptable to all three kids. I’m sure we ate a lot of crap.

As the kids got older, and busier with their own stuff, I took more interest in cooking. I became an avid watcher of The Urban Peasant, with the delightful James Barber. I wrote down his simple recipes and tried a few. My confidence grew to the point where I took on the most challenging cooking day of the year: Christmas. 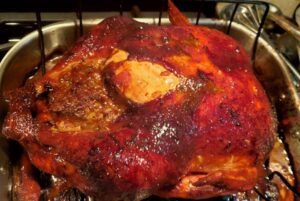 Christmas dinner. Tough crowd. High risk. I wasn’t sure I was ready.

But I was. The turkey was a hit.

And I’ve been doing turkey dinners ever since. Grown kids and nearly 15 years into my second marriage, and I’m not sure how many of the butter-sweating birds I’ve carved into, but my face may be on a wanted poster in some post office in a Turkey-dominated alternate universe.

Not every single turkey dinner has been perfect. No one bats a thousand. I’m sure footage exists of your favourite celebrity chef juggling with the pressure of getting everything finished at the exact right time, only to cut into the bird and realize that he forgot something essential. (“Dammit, Gordon, you forgot the savoury in the knobs of butter! Christmas in ruined!”) 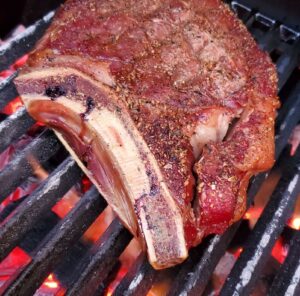 There was the “potato incident”, where a large pot of whipped Yukon Golds resembled mid-thickening Elmer’s glue. I tried “spatchcocked” turkey, splitting the bird and cooking it flat. Don’t believe everything you read online. I attempted a 32-pound behemoth nicknamed “Mister” (When you’re this big, they call you “Mister”). Mister needed a lot of gravy to rehydrate. I took the losses and learned my lessons.

Cooks – and turkeys for that matter – shouldn’t fly too close to the sun.

But, all in all, I’ve built on my successes. I’ve never had a losing streak and I’ve learned some new tricks along the way. Giblets in the stuffing, apples versus oranges when brining the bird, using tin foil and two thick bath towels to cover the steaming hot bird for a long and well-earned rest after the oven.

And I know my audience. No drastic changes to the menu. Just a relentless pressure to make the best damn meal and then collapse at the table.

Even on non-special occasions, I try to take the same approach. I’ve built up my repertoire over the years. I make excellent soup, making my own stock from chicken or beef bones. I know what day to do to the grocery store to get chicken feet to add to it. I can take a pot of veal bones and a carefully roasted mirepoix, simmer for 24 hours, strain three times and reduce it to one cup of veal demi-glace, poured into an ice cube tray and frozen. It’s there for nights when the sauteed mushrooms need a kick.

The main beneficiary of these efforts is my wife. She is a woman who ignores the seafood special at restaurants. No surf and turf for her. Fish and chips, but no pan-friend filets with cod tongues and scrunchions. Beef, chicken, pork for dinners, thank you. Homemade pizza night once a week.

The menu at home is limited, but that’s ok. I don’t need to wow her with an exotic dish with hard to find spices. She’s certainly not a food snob, but she appreciates good quality ingredients, fresh vegetables and a robust cheap and cheerful wine. 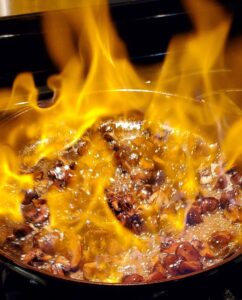 Does that mean that dinners need to be boring?

No. It means that I can focus on honing my skills. Different techniques and methods. I can cook a steak many different ways – pan fried, barbecued, reverse-seared or sous-vide, smoked and seared with charcoal and apple wood chips.

I can mix and match the seasonings or make a sauce from port or whiskey. Special cuts for special evenings. Duck-fat roasted potatoes. Different sides to match the season, including, God help me, Brussel sprouts.

(Brussel sprouts are one of the few food-related things we disagree on. They are disgusting, but I am apparently very good pan frying them with butter, pecans and a little maple syrup.)

(She also enjoys grapefruit. Every damn day. Maybe I should re-think trusting her tastes.)

Does my wife cook? I remember that she makes good lasagna. I just can’t remember if it was in this decade. She recently offered to replace one of my pots after she put eggs on to boil, went up to her office and came running back down several minutes after the pot boiled dry and the awful smell wafted up the stairs.

There’s a reason I do the cooking. And yes, I got the pot clean.

Division of labour is pretty clearly established at our house. She is my occasional sous chef and contributes her share of the dishwashing, but her work requires focus and time, and cooking is all about focus and timing.

Do I run out of ideas and enthusiasm? Damn right I do, especially when dirty pots and pans pile up on the counter as she trudges back upstairs to her office to resume work. Sometimes I stand and stare into the kitchen and it’s just too much. It starts to feel like work and there is no joy in the room.

Those are takeout nights. 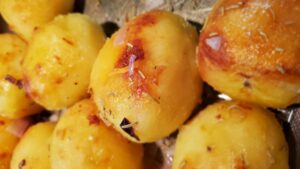 But most nights, I keep her fueled with different ways to prepare the basic ingredients. I make sure she gets lots of veggies and not too much starch. Breakfasts together are fresh-prepared and mostly nutritious, even though the eggs may occasionally glisten with beautiful bacon grease.

And every once in a while, I make her cry, just a little.

Or maybe it is the garlic after all.