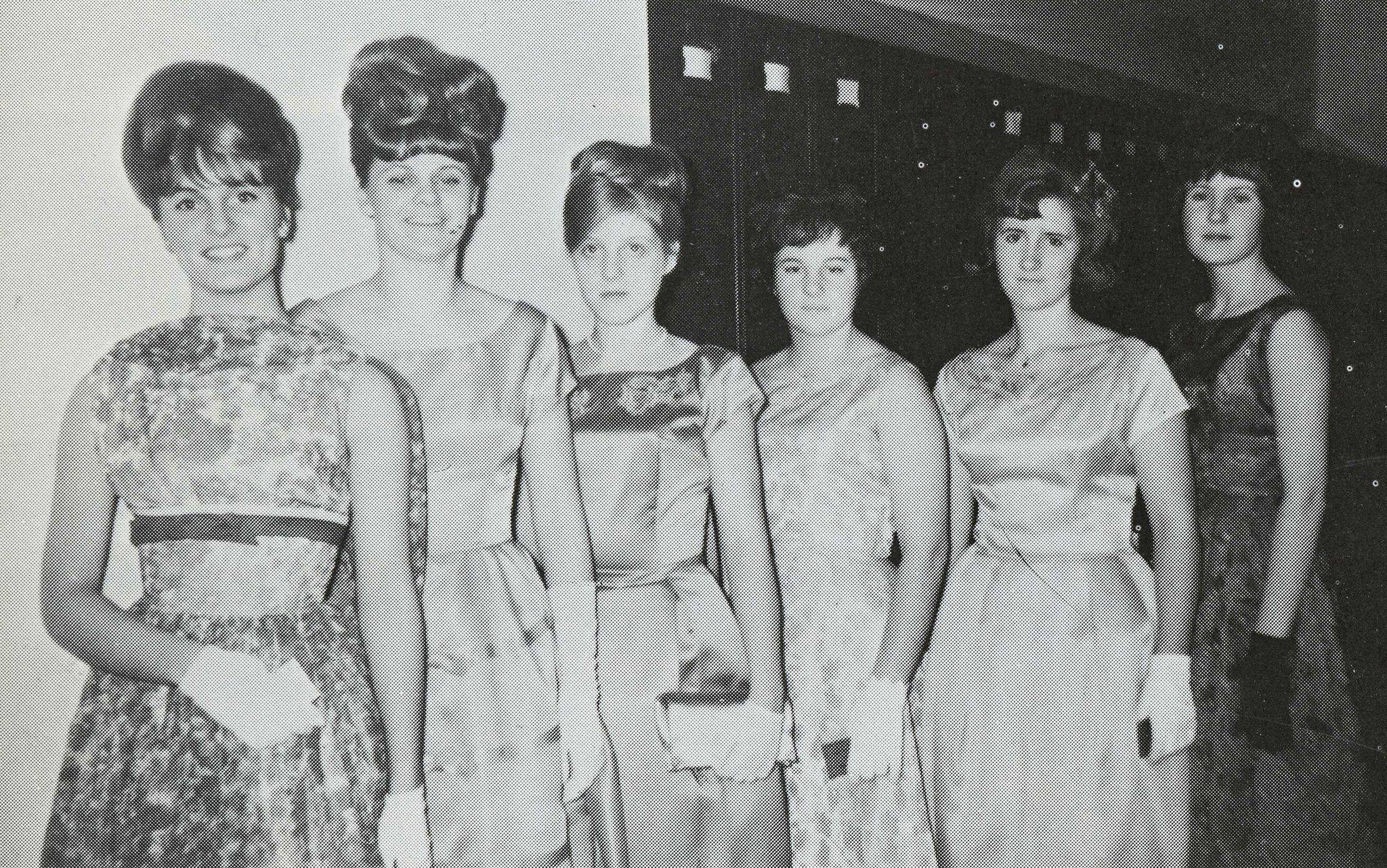 ‘Leave room for the Holy Ghost’

The annual prom was the social event of the year for most high schools in the 1950s and 60s.  At St. Joseph’s College it was a brief and glorious respite from the strictures of convent school life and the drab brownness of the school uniform.  Only seniors from Grades 11 to 13 could attend the annual soiree as the combination of dancing and boys was considered too fraught with danger for girls in Grades 9 and 10. On the night of the dance the girls, both day students and boarders had to adhere to strict rules and regulations unknown in most high schools of the day. The events I’m about to describe happened in 1960 when I was a boarder in Grade 10, forbidden to dance.

As the formal approached the nuns primed the senior girls with the rules.  No strapless dresses! If the dress was sleeveless, the straps had to be three inches wide. No wrap around skirts were allowed and knees had to be covered.  There was the joke about no patent leather shoes, (mirrors you know) but since the fashion of the day was white pumps the girls’ shoes were safe.  On the night of the prom the boys were ushered into the gym to wait for their dates. Meanwhile, both day students and boarders had to report to the Home Economics classroom for inspection.  There they would run the gauntlet of the dreaded dress inspectors. Imagine nuns in black habits who had long ago given up fashion of any kind, armed with measuring tape, needle, thread, scissors and a bag of scrap fabric. They were primed and ready to take action if a dress didn’t pass the modesty test. On this particular occasion I was one of the “assistants” in the Home Ec. Room.

As they lined up, eager to get the inspection over with, the girls were visions in satin, taffeta, chiffon and lace. Every pastel shade imaginable was represented.  Enter Vicky, a veritable apparition in rich, dark, purple. Vicky was everything we all aspired to be; poised, sophisticated and self-confident.  Her mother owned an exclusive Ladies Wear boutique in Montreal and Vicky’s stunning dress was a testament to her sense of style and good taste.  Her name wasn’t actually Vicky. She told us she had chosen it from a poster at Malton Airport when changing flights between Montreal and North Bay. Her real name was Astri. Who wouldn’t trade in a name like Theresa, Mary or Patsy to be called Astri? Not only was Vicky all grace and elegance, she was also a Protestant which made her even more exotic. In those days we didn’t even play basketball against Protestants. 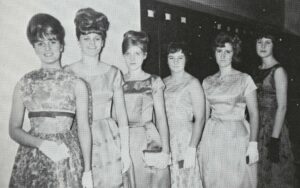 St. Joseph’s College students ready for the annual prom, taken from the 1964-65 yearbook. The feature column below is about the 1960 event when styles were not quite as modern.

As the line of girls progressed through the Home Ec. room some dresses made it through unscathed and unaltered.   Unfortunately, Vicky’s glorious frock did not pass. The straps were too narrow. Vicky’s usually confident demeanor looked a bit shaky as Sister R. reached into the bag of scraps searching for something to match the purple dress.  Out came a wrinkled mass of mauve chiffon that had seen better days.  In fact, it had probably been in that bag for decades. It was an “Aha” moment for the good sister who suddenly found her inner dress designer.  Without any thought to the actual state of the fabric she went about cutting two circles approximately six inches in diameter.  Each was folded and hand stitched to the offending two inch straps.  The result was a musty smelling, wrinkled, mushroom shaped cap covering Vicky’s once bare shoulders.  Pleased with her efforts Sister R. said, “There, I think I’ve actually improved that dress.”  Resigned to looking ridiculous, Vicky headed for the gym to join her date.

A dance at SJC was a real test for a budding teenage relationship.  Aside from the dress code there was one more, even bigger challenge, especially for the boys. The gym had a gallery half way around, accessible only from the convent side of the school.  During the dance, Sister Chaperones, were spaced evenly around the gallery so that no area of the dance floor was left unseen. The gym lights shone with full glare in a deliberate attempt to destroy all atmosphere. No dark corners allowed with dancers fully exposed to the hawk-eyed stares from above.  Close dancing was absolutely forbidden. If anyone should make the mistake of drawing a partner in for a little snuggle, a little brass bell would get a good shaking and the words “Leave room for the Holy Ghost,” would ring down on those below. The reaction was immediate with dancers hastily taking a step back. It was like a bizarre form of musical chairs.  Throughout the evening tension mounted as the sweaty palmed teenagers anticipated when the next couple would stray to close causing the cursed bell to ring out.  It was a game only the Sister Chaperones could win.

Marie Lynn Hammond, folksinger, songwriter, and former student at SJC set her version of this story to music in her brilliantly comedic song, Leave Room for the Holy Ghost. You can find it on her website. www.marielynnhammond.com.  Here is a sample with permission from Marie Lynn.

“Anna Calarco and Frankie Demarco
were dancing cheek to cheek
Sister Estella rang her little brass bell
and let out a terrible shriek
Anna turned red and in shame hung her head
but later she was heard to boast
that though Frank wasn’t God he had a much better body
than the — Holy Ghost!”

And as for Vicky, the last time I saw her she was on TV being interviewed by Laurier St. Pierre on the controversial CBC show This Hour has Seven Days. She wore dark glasses and the tinniest of miniskirts. The subject under discussion was the film in which she had just appeared. The film was banned in Canada.  I’ll leave the rest to your imaginations.