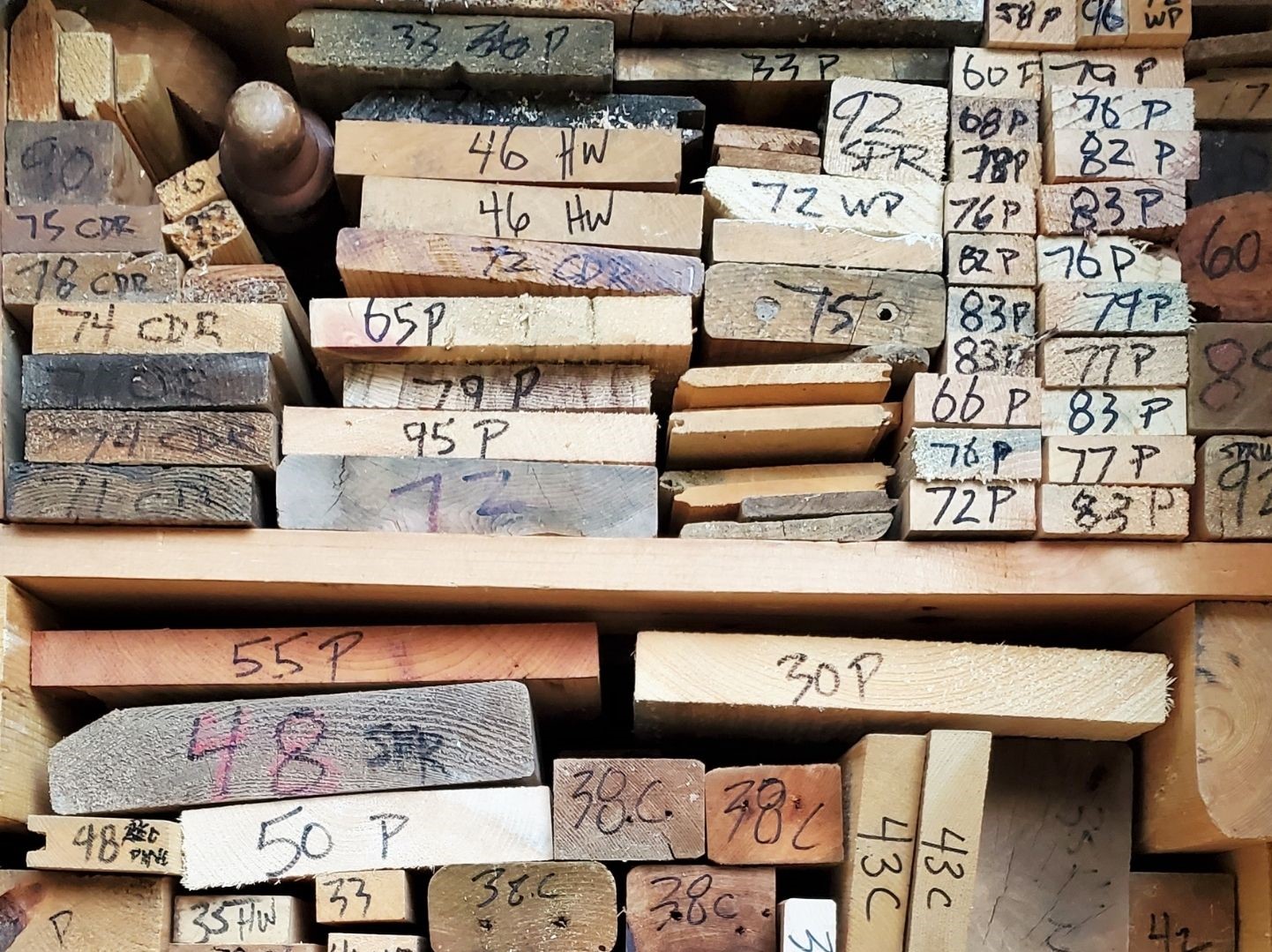 I am not a hoarder.

I want to make that perfectly clear, before anyone gets an image of stacks of old newspapers piled high in the basement, or a room full of dollar store impulse buys that I may someday be forced to part with after my kids get a court order.

But I do keep useful stuff because, well, it’s useful.

I am thinking of this today as I build some shelves for my tool shed. The Tool Shed used to just be the shed. Then, last year, I built a second shed, which became the Boat Shed. That is where I store all the stuff related to the boat, kayak, canoe, fishing rods and tackle, and other supplies that are seasonal in nature. (Isn’t everything at a cottage supposed to be seasonal?)

The Boat Shed’s fall completion consisted of the shell only. Spring has meant building shelves, screwing in hooks and brackets, and moving Boat Shed stuff in.

I cannot describe my level of excitement at this. Sure, the basement at home still remains somewhat disorganized, but cottage organizing is different. It involves the sounds of saws and drills and impact drivers. There’s sawdust in my hair and beard. My wife looks at me with a gleam in her eye and tells me that I smell very sexy.

Gleam in my wife’s eye

Moving items into the second shed means more room in the now christened Tool Shed. This gives me some room to be creative. Tools currently stored inside the cottage can be moved outside to free up room inside. (This may be a more realistic reason for the gleam in my wife’s eye.)

A new set of shelves in the corner that the outboard motor once occupied means the measuring tape and notepad come out, dimensions in pencil and eraser smudges aplenty.

Do I then rush off to the lumber yard for supplies? 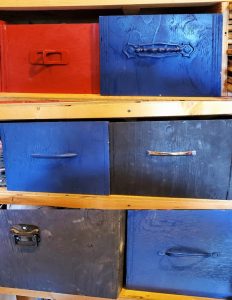 Nope, time to start going through the useful stuff. The Boat Shed replaced an old sleep cabin that got flooded. When I tore it down, I salvaged as much as I could. Shingles, insulation, vapour barrier, carpet, and beds went to the dump. Pine panelling and cedar trim became kindling for the woodstove. Wiring and electrical boxes went into a plastic bin for future re-use. Did I keep the small pieces of waferboard that were used in the roof when I ran short of wood. No. They came from the base of a waterbed I owned in the 80’s. They’ve suffered enough.

The lumber in the wall and roof that was salvageable was kept. So were many of the screws that held the roof boards on.

So, when I needed to build my shelf brackets for the Tool Shed, I had all I needed. I ripped down some scrap 2×4 and dipped into a supply of reclaimed screws to assemble and mount the brackets. The plywood shelves were cut from leftover scraps and screwed down with flooring screws that were left behind in a house we bought in 2008.

I can remember by father re-using lumber, pulling the 4” common nails that he seemed to favour for everything out with a complicated nail puller that I never did figure out how to use. He’d then straighten out as many of the nails as he could and put them back on his work bench.

Now I don’t re-use today’s thinner nails, but I did once have a extensive collection of nails, sorted by type and size, a product of a few years of working in retail building supplies as a young man with a young family. 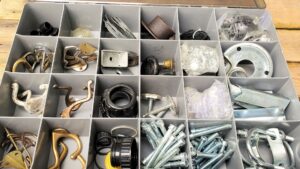 Selling nails by the pound means that nails sometimes get dropped on the floor, two or three at a time. I would sweep the nails up and throw them into a box with my name on it. When I had a couple of pounds of “sweep ups”, I’d take them home and sort them while the kids slept, and their mom worked evenings. The sorted results would be stored in a variety of jars. You’d be surprised just how many add up over time.

There were so many times that collection of fasteners was handy to have. They still occasionally show up when I’m taking something apart. The sleep cabin roof had a mix of screws and nails, neither of which were enough to do the whole roof. It even had drywall screws, from an open box purchased at a yard sale over 20 years ago.

Owning and maintaining a cottage is a constant supply of work. After many years, I’m still trying to figure out if it’s just one long project meant to test my wits and stamina. I’ve slowly become an amateur carpenter, plumber, electrician, landscaper and pretty much whatever I’ve needed to be.

And don’t get me wrong. I’m not complaining, unless we’re talking about the current price of plywood. I don’t sit around very well when I’m here. On her first vacation here, my current wife wondered why I kept disappearing from her side as she enjoyed the sun by the waterside. She found me digging up and old stump in the backyard. It’s not that I preferred the company of the stump to her. Not at all.

The stump was just bugging me.

I was stretching my legs and I walked by it and next thing I knew I had a shovel and a trench digging tool, working away at it. Every half-hour or so, I’d wander back to sit by the river, then wander away again after 20 minutes.

My wife has become used to this behaviour. I will be reading a book, mutter “Time to putter” and slip away for a while. I might spend 15 minutes just looking around, wondering what needs to be done. I also might pull out the saws and make something useful.

This is where the scraps come in. I don’t need to go to the store. I’ll just make something from what I’ve got. Small pieces of leftover plywood, plus a few mismatched handles from a display I saved from the trash in 1987 and some almost-empty cans of spray paint make some handy custom-sized storage boxes.

What did I put in them? Stuff. Useful stuff.

I’ve got old toolboxes dedicated to electrical and plumbing parts and multiple containers with sorted bits of hardware, nuts and bolts, and whatever the hell that thing is. I know where most of everything is and things mostly likely to be used regularly are kept close at hand.

I buy new materials when I need it. I didn’t build either of the sheds out of scrap. I just don’t like buying things I already have.

Except maybe power tools. I always enjoy that. 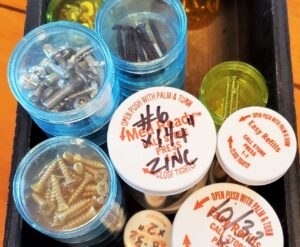 As I get older, I’ve got a little better at letting go of stuff, even useful stuff. The local waste transfer site, which shall always be “the dump” to me, is a good place to get rid of things I just no longer need. Scrap metal has its own place and I contribute regularly. I keep a large plastic pail in the Tool Shed and toss in old screws, rusted bolts, and burnt out water heater parts. Of course, I’ve stripped things of anything useful. That’s a perfectly good grounded cord. But I’ve also made certain that defective electrical equipment is thoroughly disabled. I don’t want someone mistaking it for something useful.

There’s also a spot where people will discard items that are just no longer useful to them. I’ve left old tools there, household items, even some old rods and reels. I always feel a sense of accomplishment when I leave something that I know someone can use.

Am I a fervent recycler, a cheapskate, a guy that just enjoys using the tablesaw? Likely a mix of all of them. But, most of all, I don’t like waste. I don’t mind the work it takes to sort and store the things left behind and there’s a sense of accomplishment when I can say, “I’ve got something that will work for this.”

And that’s a useful habit to get into.