There was an upswing in the long-promised and turtle-slow passenger rail service commitment by the Progressive Conservative government recently.  The announcement of the Initial Business Case (IBC) for reinstating the Northlander triggered a political firestorm as the opposition reminded the public of the Initial Campaign Promise in 2018. It had been axed by the Liberal Government of 2012.

Whatever one thinks of the IBC and its validity or timing, I hope the powers that be recognize one of the main attractions of intercity rail passenger service is that it’s more than just a means to get from one place to another, it is an experience in itself.

I remember as a conductor seeing the absolute joy on the faces of children boarding the train for their first ride.  It was equalled only by the look of satisfaction on the faces of their parents in being able to introduce their children to this enthralling mode of transportation.   Families would want to take pictures with a friendly, accommodating conductor, to record the event for posterity.  Possibly not as many as the tourists who took the train to see the fall colours of Muskoka, but they shared the same passion for the trip. 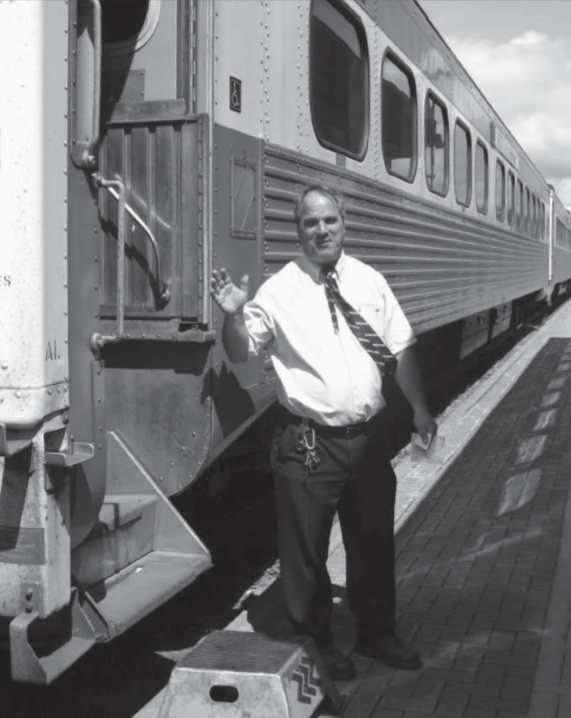 Northlander Conductor Phil Koning, now retired, while on the job in 2010.

If you want to see an appreciative passenger though, you have to watch a railfan on a trip.  They usually have more equipment and knowledge than the crew and are extremely inquisitive.  If you can give halfway intelligent answers to their lists of questions and show them some of the inner workings of the train, they will leave happy and secure in the knowledge that at least the railway doesn’t allow idiots to run the trainsets.

The point I’m trying to make, however, is I hope the bean counters don’t cut the service down to where it is just a larger bus.  We already have a very well run bus service and it provides a vital connection for those who cannot or will not drive a vehicle.  But rail service to a remote region is meant to be more than just another way for area residents to access the transportation system of the country…it is an economic pipeline into the region from the population dense region of the GTA.  It’s a relatively bottomless bucket of tourists with millions of GTA residents who have yet to be introduced to Northern Ontario and what it has to offer.

This is where the Ontario Northern Transportation Commission move to the Ministry of Transportation of Ontario really needs to be exploited.  The relationship between ONTC and the Ministry of Energy, Northern Development and Mines (MENDM) was never close enough to allow the full potential of the railway to be realized.  Now with MTO backing, ONTC can work with the organizations under the Ministry of Heritage, Sport, Tourism and Culture Industries and develop travel packages that offer the tourism businesses a chance to pull those GTA residents into the North.

The combination of access to the Metrolinx ridership, who have already displayed a preference for train travel, and the likely lingering reluctance to engage in international travel will create a golden opportunity to spread some of Ontario’s wealth around.  I just hope we get the right type of rail service implemented before the opportunity passes us by.