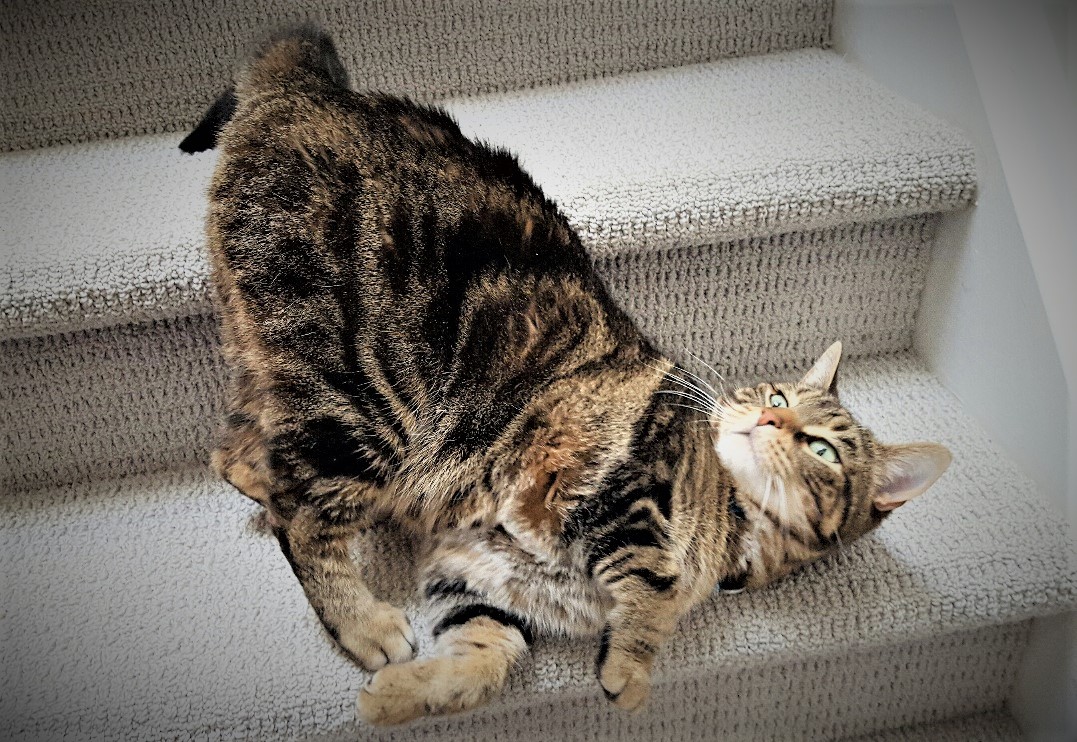 Exercising my right to speak

“When I talk to the cat, we don’t have long conversations.”

“Sometimes I can’t get a word in edgewise.”

She thinks I might be losing it, and that’s a distinct possibility, given that I’ve worked from my dining table for most of the past year or was it really three years, or a couple of hundred weeks, maybe a significant percentage of my fifties? Do we even count time anymore?

We were talking about talking. Or not talking, depending on your perspective.

(My wife and me, not the cat. We talk about other things.)

I normally spend a lot of my work time talking. I’m training, advising, facilitating, talking shop, making small talk, talking, talking, talking to the point where I’m tired of my own voice. By the end of a workday, I just want to crash for an hour in a hotel room, watching a little trashy TV (Judge Judy is an excellent show to really zone out to). 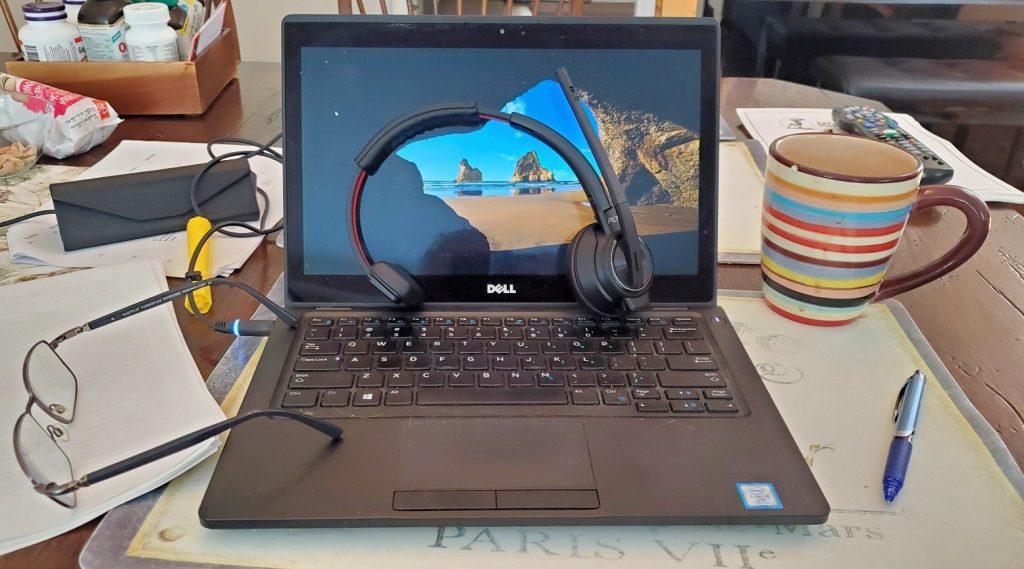 But time in meeting rooms suddenly came to a stop. So did time spent chatting with fellow travellers, lunch with friends, gossiping with neighbours and generally speaking much at all.

In the meantime, I’ve discovered that, when I do need to speak, my voice feels…out of shape, like most of the rest of me. It seems to tire more easily, becoming raspy after an hour or so. It’s hard enough to stay engaged, staring at my laptop, from my dining room, at people talking from in their dining rooms. The longer the meeting lasts, my voice, and my enthusiasm, give increasingly diminishing returns.

It almost makes me want to scream into the void, but that would likely just give me a sore throat.

Despite the periods of silence, I’m still working. My poor dining room chair can attest to that. Today was my third day in a row presenting training by video call. Instead of standing in front of people, moving around, reading faces and body language, I’m staring at one person on video and the rest just small circles with their initials on them. For most of the entire session, I’m the one doing the talking, occasionally interrupted by a question, or several seconds of awkward silence while I watch the one guy I can see on my monitor, checking his phone for the 17th time.

Satisfying? Not in the slightest. Effective? Definitely less so than I’m accustomed to. I find myself taking extra time to explain concepts, because I can’t tell if they’re getting it or not. Is there even anyone out there? I’ll occasionally lose someone for long stretches because of connectivity issues at their end. Or so they claim. I guess we’ll never know.

And my voice? It’s exhausted. 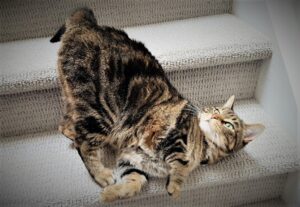 I’ve tried to keep it in shape. Hence talking to the cat. He doesn’t disagree with me much, though it’s hard to say if we’re on the same page or he’s just not listening. The only time he really argues with me is if I’m petting him and I talk too much. It gets worse if I start meowing. Then he really gets angry. Especially on the basement stairs.

(The cat, whose name is Hodge, has a routine. When he sees me heading towards the stairs in our house, he immediately darts ahead, stops on the closest step, and presents his butt to me. He is relentless. He wants his “bum” rubbed, which means his lower back, right near his tail. If I talk to him while doing it, he starts getting angry, meowing and eventually swatting me. And yet, he still does this. Every damn time. I’ve come to accept my obligation. He’s bored too. I get it.)

(Quick cautionary tale: A guest asked what the cat was trying to tell her when he did this when she tried to climb the stairs. My wife said, “He wants you to rub his butt.” The guest took this far too literally. It was some time before she and Hodge could look each other in the eye. He doesn’t talk about it.)

So, for both my sanity, and the cat’s, I try to keep the conversations short and non-controversial. “Is it hot enough for you? Do you need your water changed? Why can’t you learn to like the neighbour’s dog? Listen to that red squirrel…he’s definitely not happy with you today.”

I do sing sometimes. That’s good vocal exercise. I can carry a tune pretty well and I have what is best-described as almost a two half-octave range. My wife likes when I sing, unless she’s working, which is quite often. Bursting into her office to share a big showtune that popped into my head wouldn’t go over very well. (“OKLAHOMA, where the… Oh, sorry, I didn’t realize you were in a Zoom call. *long awkward pause* Does anyone have a request?”) When we have dinner together, we talk, but it’s not the same workout as training a dozen or thirty people for a full day. I think dinners together would be far less frequent if I spent two hours covering a detailed process on how to measure the value of work that the cat is performing.

I’m also not sure the cat would be enthusiastic about it either. He does the bare minimum. He doesn’t have set hours of work and isn’t very motivated by quotas or snappy slogans. He knows we only interviewed one applicant. It’s best to just keep our expectations low. 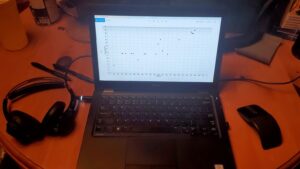 When I was very busy and on the road often, my wife was working in an office where she had little contact with anyone for days on end. I would come home, and she’d follow me around the house, talking away, glad to have someone to listen.

Now the tables are turned. I can hear her voice as she meets with clients via phone or video in her home office, while I type away on the ground floor, dreaming of meeting rooms in Regina, or Halifax, or even Winnipeg.

Yes, I would kill for a meeting in Winnipeg. This is what it’s come to.

One pandemic development for me is that I’ve started listening to more podcasts. Unlike listening to music, I’m not gonna sing along. After all, I don’t know the words. However, I do occasionally find myself arguing with an actor who appeared on a TV show in the early 2000’s and is interpreting a scene differently than I am. “There’s no way that Toby is being snarky in that scene! How could you possibly think that? Dammit Josh, why are you even talking about this? You didn’t even appear until season four!”

I usually stop about 45 seconds into it, realizing that he’s just not listening to me descending into madness. And the cat is staring at me, as if he has questions I cannot answer.

What will happen to me when I return to civilization? Will I forget some words and just stand there in front of them with a blank look, hoping that they think their screen has frozen up. Maybe they will be just as out of shape as me and not realize that I’m actually in the same room as them.

One of the rare occasions in the past year where I was in the room with a small group, I found myself losing my voice by late morning. I was trying to power through, lowering my mask only to take some precious sips of water. My throat got drier and drier, almost to a whisper, and I was so happy to escape to lunch with some dignity. I stopped at a pharmacy for more water and some throat lozenges and rested my voice for the hour.

When we resumed in the afternoon, I decided to take a proactive approach and popped in a lozenge. It was then that I learned a valuable lesson:

Don’t suck on heavily mentholated throat lozenges when you’re wearing a mask. It is a very bad idea.

In less than a minute, the vapours had risen behind my mask and straight into my eyes. The tears started before I even realized what was happening. I quickly excused myself and went to the washroom to dry my eyes and blow my nose. I loudly cleared my throat, hoping that the sound wouldn’t travel down the hall. When I went back into the room, I had red eyes and the sniffles.

And then, within the hour, my voice started to give out again. I was desperately trying to quietly clear my throat, which resulted in a coughing fit.

I looked back at their eyes and saw fear. Was this guy showing symptoms? Do we need to get tested? What were we thinking?

It’s hard to be reassuring when you’re in the state I was in. I promised them that I was feeling fine and managed to power through the final hour without too much trouble. I was thankful to be interrupted with questions. When the session ended, I was very glad to be on my way. I literally broke into laughter as soon as I left the parking lot.

I put on some loud music and sang all the way home. I needed the release and I sure needed the exercise. After all, game day is coming soon and I’m gonna leave it all on the field.

And the cat will enjoy his post-game butt rub in silence. He’s earned it.