How far will you extend your calls for freedom and for whom?

There was a man on the corner amid the convoy protests last week panhandling for money. In a sea of Canadian flags and freedom signs, that man, who I know to be homeless, was most certainly not free.

Solidarity with him and everyone doing their level best to survive the negative repercussions of a deadly pandemic and an often incoherent, bumbling response that has left that man living amid all this uncertainty without access to safe shelter.

This is a guest column by a provincial election candidate

Increasingly, people have grown tired of the pandemic and some of the head scratching reactions to it. In following the guidelines, there hasn’t been much room to express discontent or debate in peaceful ways away from a keyboard. With many surgeries still on hold, and pediatric hospitalizations a reality unseen by most Ontarians, we’re doing our part to protect the capacity of a fragile healthcare system that the same two parties let fall into disrepair after decades of austerity. 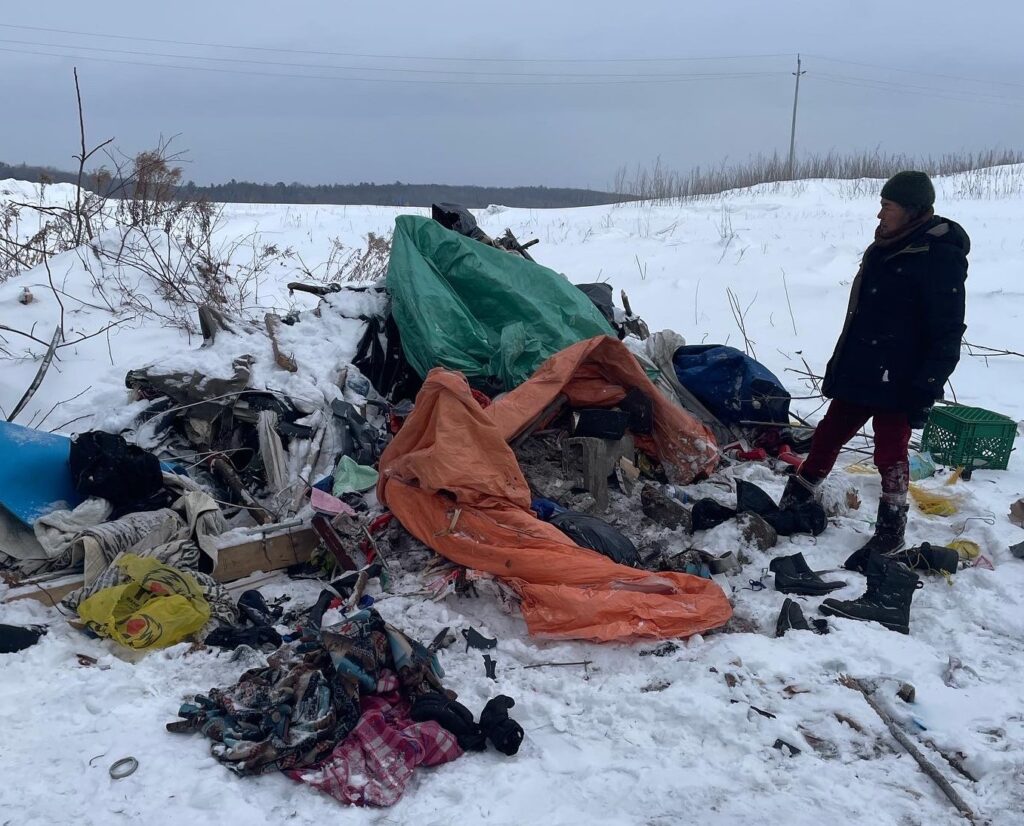 A homeless person’s encampment bulldozed by someone for reasons hard to fathom in the middle of winter. Jackie Hookimaw Photo

It’s certainly valid to have a stern critique of our elected leaders right now. For almost two years we’ve watched our provincial government, through policy, make pandemic decision after decision to backstop a corporate lobby accumulating record profits at the cost of literally everyone else.

In Toronto, a man froze to death today in a bus shelter. Here at home, our last point-in-time survey registered 300 people experiencing homelessness in a district experiencing a proper Northern Ontario winter. Unsurprisingly, the independent financial accountability officer in Ontario has determined the current provincial government’s housing programs are not meeting demand.

We lost six people to overdose already last month; yet, officials won’t breathe a word about it, instead choosing to uphold backwards drug policy that has long since proven unsafe and unjust, especially amid a toxic drug supply, and capped overdose prevention services.

Food charity networks not designed as a solution

Our local food charity networks are strained, never designed to be more than a stop-gap for deeper inequality. Yet, the provincial government’s pronouncements for a new minimum wage won’t even reach the bar of a living wage in Nipissing; meanwhile, social assistance and disability rates and supports remain frozen well below the poverty line, even as the cost of living continues to rise.

Long term care, a long-standing profit haven for current and former Conservative politicians remain among the deadliest congregate settings during the pandemic with 56% in Ontario in outbreak last week. Yet, we’ve seen no urgency in this government’s announcements where a four-hour standard of care won’t be implemented until 2025.

Meanwhile, healthcare workers, educators, childcare workers, and frontline workers all along the supply chain still have minimal, reliable access to personal protective equipment, proper paid sick days and many are working under regressive legislation (Bill 124), not to mention the collapse of contract tracing and reliable public access to testing when this government was (once again) caught ill-prepared nearly two years into a crisis.

‘Rising tide of alienation and anger’

The list of governmental failures goes on and on and on and no doubt has contributed to a rising tide of alienation and anger. But it’s vitally important to not let those feelings uncritically fuel support for movements grounded in racial inequality and hate, where a cast of bad actors with ties to the far right are mobilizing resentment to help normalize an ugly, harmful ideology.

Instead, calls for freedom must centre the rights of those most cast aside by clear gaps in government response. This means being free from homelessness and hunger and income insecurity, and early death due to bad public policy, freezing temperatures, and despair. In communities where the poorest and most precariously housed continue to pay the ultimate price for social inequality, our responsibility to one another requires that we ensure governments stop ignoring the basic social and economic foundations we all need to be free: safe access to housing, safe schools, accessible public healthcare, prevention in public health, and so on.

So, as the trucks continue to roll, will we notice who is still homeless, who is still isolated, and who has been left behind by government inaction? How far will you extend your calls for freedom and for whom?

Erika Lougheed is the Ontario NDP candidate for Nipissing. A mother of two, Erika currently serves on the municipal council in East Ferris, works for Canada Post, and runs her own pottery studio as one of our region’s local artisans.