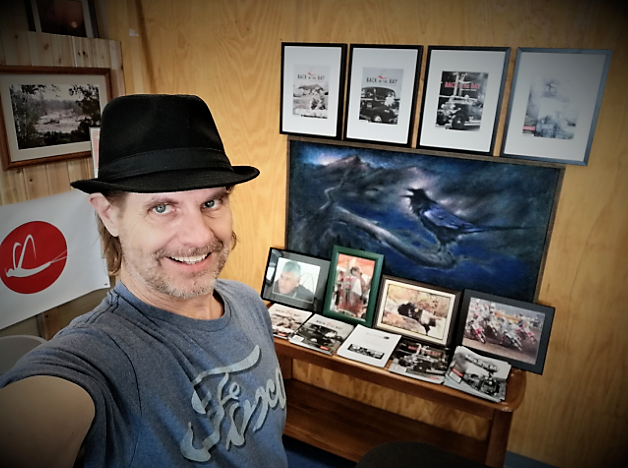 It was a busy week at the Hacienda in Corbeil as we pulled together a full package for the sixth episode of Small Town News & Views, lit a fire under a controversial issue in North Bay through the weekly BayToday column and juggled numerous aspects of the deadline for ads and editorial submissions for the Spring 2022 edition of Back in the Bay Magazine (being produced at Beatty Printing next week for April 1 publication.)

On Sunday, March 13, one of the hardest working drummers in Northern Ontario dropped by the Hacienda Studio with Stephen J. Leroux offering insight into his percussion propensities, how African beat is spicing up his life and some highlights from the multitude of bands he’s been with through five decades. Steph, well-known as the Fishin’ Musician, talks about how he got the name, his favourite band from the 1970s, a memorable moment on the Chief Commanda II doing sound tech work arranged by the late Peter Sab Sabourin for the Downchild Blues Band (which hits the Capitol Centre April 21 as part of its delayed 50th anniversary tour).

On Tuesday, March 15, former North Bay and District Chamber of Commerce president Mike Gelinas stopped by the Small Town corner in the Nipissing Region Curatorial Collective Suite 14 co-working space at 176 Lakeshore Drive. He was asking for some feedback on an issue but I turned the tables to have him interview me about various topics, including my latest thoughts on running for a seat in the North Bay city council chambers next fall. First announced as a consideration in a September 7, 2021 column at BayToday, I’ve spent the winter pondering the crossroad decision to be made after the June 2 provincial election and before the celebration of my 57th birthday June 14. It could go either way as there are major implications for how I spend the next 20 years of work. In either case, the Back in the Bay Magazine will remain one of my primary commitments as a “labour of love” and part-time enterprise.

Of course, there were a multitude of other interviews and conversations, several of which were sparked by the column questioning the latest Canadore College forays into delivering health care services in long term care as well as addiction and mental health services. It seems the provincial and municipal election campaigns are in full gear …

But all that was put aside Saturday, March 19 for a little bit of hockey as the Nipissing Lakers women’s hockey team hosted the Brock Badgers at Memorial Gardens. It was an exciting and close match that went the visitors way in front of a great crowd. Next stop for the Lakers is the nationals in PEI next weekend, with games starting Thursday March 24.

Have any comments to add to the fray? Email editor@smalltowntimes.ca