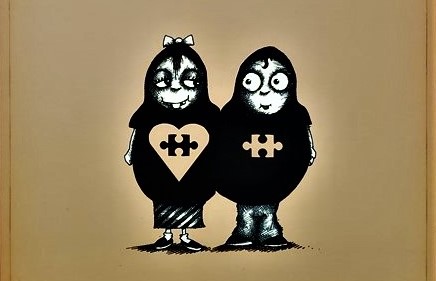 My wife and I talk funny. I don’t mean in funny voices. It’s just that our conversations could often be interpreted by others as complete nonsense.

We were watching TV recently and learned about French fashion designer Madeleine Vionnet, creator of the “bias-cut” dress, which fitted in a much closer, slinkier style than more traditional women’s fashions. This prompted a discussion about whether the dresses were considered “Flapper” era style. It went downhill from there.

Me: “The reason they called those “flapper“ dresses was that they had a flap in the back for when you went to the bathroom. Before that, you just pooped into your bustle and emptied it weekly.” 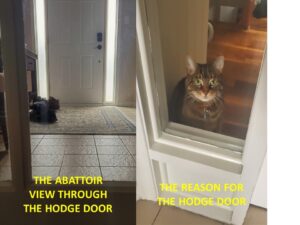 Of course, humour is selective. My favourite method is to start with a serious premise and find something funny within it. Just coming out with a random remark about pooping in a dress would be crass, and likely a sign of early dementia.

Technically, almost no subject is off limits, but I’m not a shock comic. Politics can be funny, war is not funny. Making fun of bad people is always good material. Don’t like mocking racists and hypocrites? Don’t plan on being invited to dinner a second time.

But most of all, I like a joke that will make you think. My favourite joke was prompted by watching Elvis Costello interviewing Rufus Wainright about what sort of music he was listening to at the time, and Rufus remarking that he was listening to a lot of German classical music, specifically Wagner. 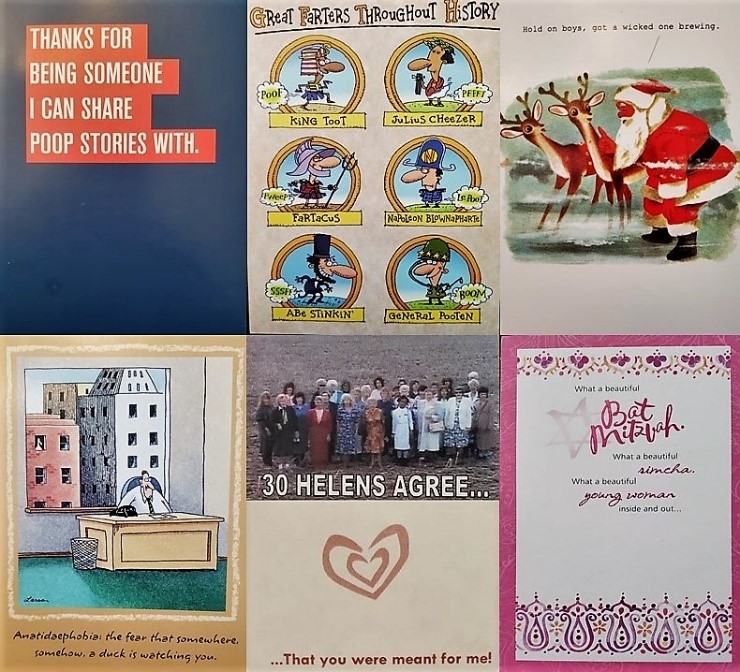 Hahaha…Nice try. Maybe if you’re sitting beside me at a bar sometime, I’ll tell you the joke. It’s not a mean joke – Rufus is a very talented fellow and I’m a fan of his music – but the joke is definitely not suitable for work.

When I heard the exchange, I turned to my wife and said the punchline. I don’t write my material into a notepad then woodshop it until it’s perfect. It just becomes part of our funny banter.

Do we sometimes make no sense at all? Sure. The front entrance to our house is referred to as “the abattoir”. Why? I’m sure neither of us remembers. Years later, we still use the term regularly. The abattoir is accessed through the Hodge door. Someone listening in would think we were mad.

You Complete Me: Bald Guy Greetings (my favourite line of cards)

Of course, my wife is happy to contribute to the nonsensical discourse. A TV commercial about cat litter prompted this exchange:

Wife: “They wouldn’t have this problem if they installed boards around the litter box.”

Wife: “Yes, like in an arena. With glass on the boards.”

Wife: “Of course with a scoreboard.”

I’ve gotten into the habit of buying her funny greeting cards for special occasions. Not as easy as it sounds, given the sorry state of the greeting card writer’s guild. I scour the stores for cards, and try to keep a little stash on hand.

She’s kept every card I’ve ever given her. It’s a pretty thick file folder. I can see my choice in cards slowly change over the years. It’s important to ease someone into a life of silliness. You don’t give them a card celebrating shared poop stories on your first anniversary. You need to make sure they’re not a flight risk before you spring that kinda nonsense on them.

I’ve given her poop joke cards, cards about farting, and cards that are just plain weird. For her birthday this year, I just couldn’t find a card that was funny enough. So, I bought her a Happy Bat Mitzvah card. Is she a young Jewish girl? No, but that’s what makes it funny.

Being creative keeps life fun. Can’t get to the store? Print a card with a nice message, with extra points awarded if it refers to a classic Kids in the Hall bit. 30 Helens would surely agree.

When she asked me to fix the toilet seat, I saw an opportunity to make it romantic by leaving a little memento behind.  (No, not THAT kind of memento!) Is that weird? Damn right it is. Romantically weird can be a good thing, if you’re both into that.

Before you start thinking that we don’t have normal conversations, we do. When we’re not working, staring endlessly at our computer screens, we talk about all sorts of subjects We’re one of those lucky couples who can be caught talking like good friends, rather than constantly “having a talk”, you know, the kind where one party in the conversation looks like they’re concocting an elaborate escape plan in their mind. You can see the fear in those eyes. It’s not a pleasant conversation. It’s a hostage situation.

‘…excited when we got a third TV channel’

There’s always something for us to talk about. Work, music, entertainment, gossip. She’ll ask me about some TV show she remembers from her childhood and I’ll say, “I grew up in a town that had two TV channels. Why do you keep asking me about these shows??” (We were very excited when we got a third TV channel in 1974.)

Current events are often a topic of discussion. I work with the TV on in the background, so I’ll often give her a quick recap of the day’s events. Let’s face it. Things are pretty grim. There’s not much to joke about some days.

But every once in a while, there’s an opportunity to find a little levity, even in the middle of a global health crisis. As we were watching a news clip from New York City, my wife wondered aloud if Radio City Music Hall had been shuttered the entire time.

“Yes”, I replied. “Even the Rockettes have all been working from home.”

What can I say? I work with what I’m given. We find a little humour where we can. After a long, hard day, we relax by watching British gardening shows and we laugh at the struggles of the closed-captioning writer trying to capture all the Latin plant names.

‘…we’ve got each other’s back, no matter what.’

Life is serious business. People often assume that a quick, light-hearted response is used to avoid an uncomfortable subject, but that’s not always the case. As we get older, many of our conversations become more significant. We worry about ageing, our health, retirement barrelling towards us. We’re not avoiding those hard subjects. We talk them through like grownups. There’s always some symptom of getting older, some test the physician wants to order, some new medication that keeps us alive and kicking.

It may not be all fun and games, but a smile, a shrug, and “It’s really always something, isn’t it?” shows that we’ve got each other’s back, no matter what. Laughter may not cure all ills, but it can help treat the human condition pretty well.

Sure, someone reading transcripts of our conversations would shake their heads at the foolishness of them, but who cares? And it’s likely a good thing that we don’t have voice activated devices in our house. Imagine the confusion that algorithm would develop. It would eventually need an emotional support Roomba. (“Where is the abattoir? And why do they keep mispronouncing ‘breakfast’?”)

Nope, the funny talk is just for us, and we’re going to keep up the silliness for as long as we can.

Now let’s go laugh at Monty’s dogs on that gardening show. They always crack us up.