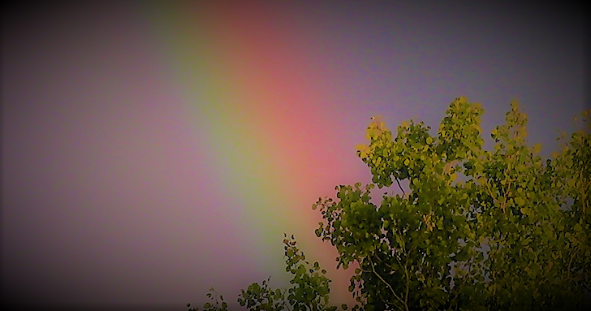 I have been sitting on this blog / article for quite some time because I know many won’t get it, or many just won’t read it because it is about politics. The strange thing is, that so many people do not seem to understand that politics affect everything you do in your own life. There is a real disinterest in politics nowadays which is understandable because we often feel like no one is listening to us unless you are a ‘rich old white str8’ man or a big corporation.

Many people do not even understand the difference between socialism, to dictators, to communists, to fascists, to liberals, to Tories. We see the comments all the time that are wrong and with misinformation, and majority of people just follow along, like it was in the bible. 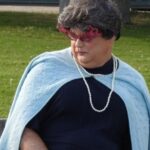 We all have different needs and desires in life. We all just want to live a life that is full, with our families or chosen families, with a spouse or just live a single person life. We want a work life balance and some of us want to create communities that everyone is equal, inclusive and can be heard when they want to be heard by our employers, our partners, our families and yes, you got it, our elected officials. But that is the problem, isn’t it? We do not get heard by many folks and sometimes that can include our own families, but definitely includes elected officials.

If we are living in a true equal and inclusive society, everyone would have their chance to be heard by elected officials. We can’t even get heard by many big media news outlets when we want actual change.

North Bay Pride has tried hard to create a debate where you are heard. Many debates we see are put together by big corporations like FONOM, or CBC or CTV, and when a community member is heard, it is usually rather tokenistic at best. There is no real discussion how political decisions affect you or me, and there certainly is no follow up so we can get clarification or hold a politician accountable when they do not actually answer the question. We just move on to big corporate questions, foreign relations, or programs we already know what each party is going to do long before a debate takes place. We do not need to know their promises during a debate, because unless you lived under a rock, we already know when we are going into an election. Let us be honest here, the platforms are pretty much the same every election. 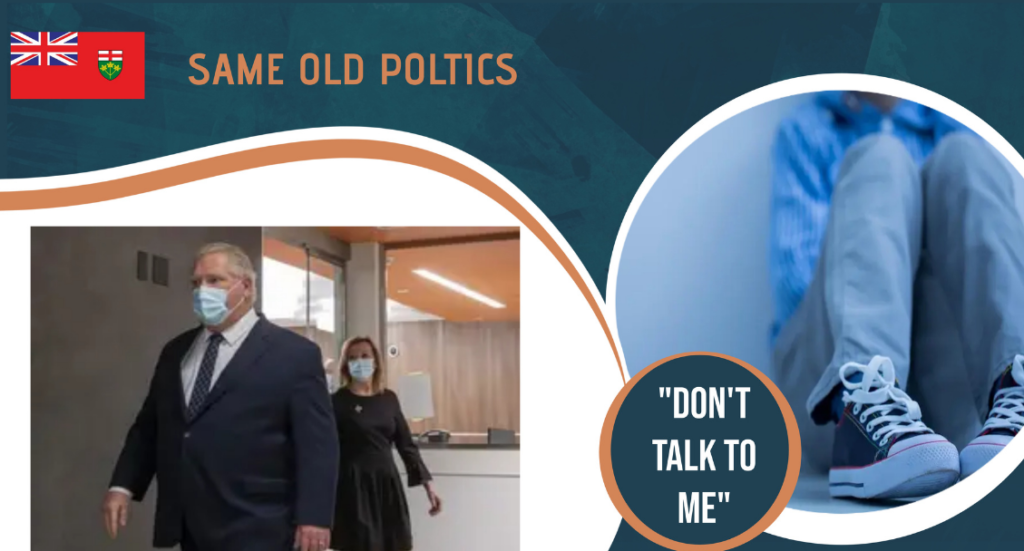 During the last federal election North Bay Pride again tried to get a federal leader’s debate, but sadly none would respond to the request from the federal leaders or their teams. Maybe that also explains the lower turn out of actual voters because we have all seen the same speeches, the same platforms, the same promises and certainly the exact same debates. It shows that many of our politicians are not listening to most of us, as people are just trying to survive. Not to mention all the misinformation that is circling around elections, and the appearance of hate groups like we have never seen since early 1900s. Only 66% cast their votes in 2021 federal election. Imagine what could have happened if 80% of the voters voted. The outcome could have been very different. During the last Provincial election, the voter turn out was 58%, which according to HuffPost was one of the highest turn outs in the history of Provincial Elections. https://www.huffpost.com/archive/ca/entry/ontario-voter-turnout-2018-election_a_23454169 That is sad, because it means almost half of the voters felt the need not to vote. I do not know the reasons for not voting but do know from many in the LGBTQ+ community, we never feel heard by politicians, so many have made the statement of, “why bother?”

Leading into the last provincial election in 2018, North Bay Pride again, stepped up and tried to bring the Provincial Leaders together in a debate that was led by people, yet again, many requests went unanswered. Over the next three years, North Bay Pride reached out to the leaders and finally got some commitments from the leaders. What strikes me as odd, that it’s one pride organization, instead of being supported by all Pride Organizations. I always thought, pride as political and we are supposed to fight for change, but it seems many are more worried about grants and funding, then doing what is right for communities. The power of prides is untapped and maybe that is what politicians want at the end of the day.

Mike Schreiner, the Leader of the Ontario Green Party, has always been the first to respond.  Many comments have been made, like Mike has nothing to lose by participating in a debate, however, what if it’s the case he wants to hear from people opposed to big corporations, and the rich? Society spends far too much time looking for the negative then the positive in everything we see or do. Mike did say this when asked about participating in North Bay Pride Debate, “I want to emphasize that Ontario Greens believe in an inclusive Ontario. Like previous years, I accept your invitation to attend a debate or meet and greet session for North Bay Pride. It is important to be accessible to voters and to participate in events that provide an opportunity for voters from diverse backgrounds to ask questions of party leaders and candidates. I do wish my fellow leaders from other parties would agree with me.”

Andrea Horwath, the Leader of the Opposition, Ontario NDP, was more challenging to get committed, but eventually she did, because she also realized there is a real lack of representation when it comes to people at debates. Andrea had this to say, ““This campaign is all about connecting with people and families as we all work together to form a government that will finally fix the things that matter to us all. From local candidates holding town halls and community debates, to knocking on doors to hear directly from you, we’re going to be in constant communication with everyday folks.” 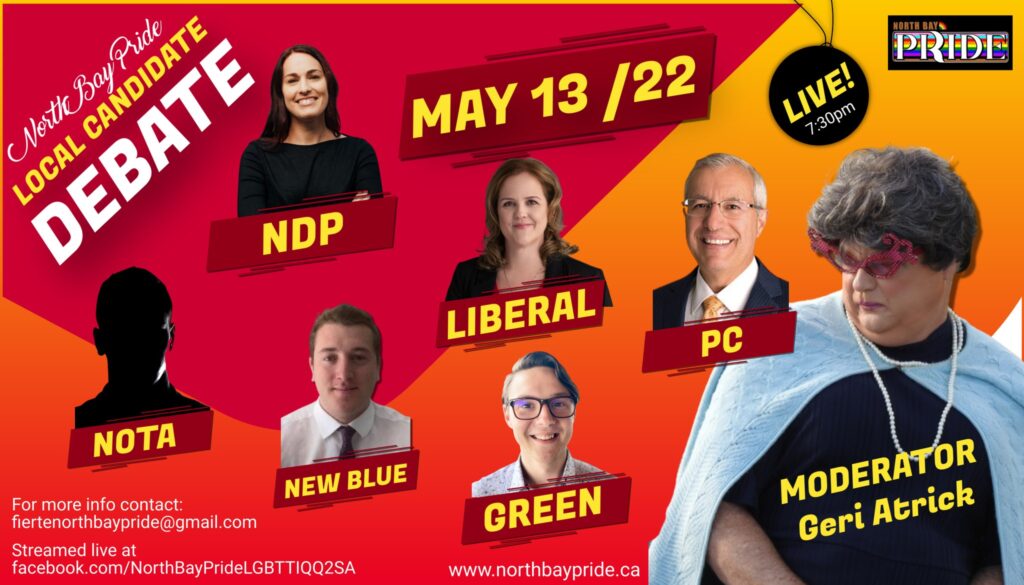 How does a leader of any party run a campaign without hearing directly from the voters who are never truly represented at community town halls, or debates, even the majority of local candidates have trouble with this concept?

Steven Deluca, the Leader of the Ontario Liberal Party, originally said in a personal email prior to the campaigns beginning, he would be happy to attend the debate. However, since then, we have not had any response from Steven nor his team. I feel like he would not want to miss the opportunity, but however, you just never know at the end of the day what will happen.

The current Premier Doug Ford is another kettle of fish altogether. The Premier often talks about the “People” of Ontario. We tried almost weekly for over three years to have the Premier participate in events with Pride because we have done it with all the leaders. Pride does not get to pick and choose which parties we worked with, we work with who is in power and formed government. Yes, some governments have been easier, however, we have experienced many, many, many unanswered emails, phone calls and visits with Premiers office and their teams. No one expects the Premier to answer the call, but certainly anyone on their team could talk to us. Even the current campaign manager, Kory Teneycke, does not even take a few minutes to make a call, to even see if it is possible and we have had his personal cell phone to call, which he never answers.

When the local FONOM asked a short time ago the provincial leaders to join their debate, all leaders jumped on board and answered right away. https://fonom.org/ Although on their website they claim to advocate for the people in Northern Ontario, its hard to decipher whether that includes marginalized voices such as Indigenous communities. I am no way saying that the debate should not happen or FONOM should not have such a debate, but I find it odd, that a group of rich, white str8 men who get access to politicians on a regular basis, get participation in a proposed debate while you or me, are left looking through the window one more time.

No one is saying that one group deserves to be heard over another or demanding time. What we are saying is that people who are affected the most by decisions made by politicians, do deserve to be heard by more then just someone running in the election locally. The trend of elections is that the leaders are surrounded by people who control what they will do or where they will attend, however, its clear that us, the average person is not in the cards for these teams. We need to be asking why? Reality is, the actual “People” control the elections, we just do not seem to know it for some reason.

We have been looking for new elections, but we seem to be stuck with the same old politics, same old speeches, same platforms, and same old debates. That is why we have low turn outs to vote, we have many not engaged in change and why we have no accountability regarding politics and clearly most leaders are truly not listening because otherwise, something would have changed in these current elections especially during COVID.

It does raise the question, “Who truly cares about the people?” If you can answer that my friends, you are doing much better than me. I know the platforms, I know the promises, and most likely I can write their speeches for them. That is the problem, isn’t it?

What are you going to do now? Lay down and accept it, or demand a change? It is up to you, and I am counting on you to change politics for the better finally.

Guest Column – Not So Str8 Talk by Geri Atrick

A Jason Maclennan creation: Geri is an older drag queen that has experienced life. She rolls with the punches that life will throw. Geri has been a part of shows called Not So Str8 Talk, Pound Abby, North Bay Pride, Not So Str8 Talk on Hunter’s Bay Radio and muskokaradio.com. Geri will be brutally honest with you if you can handle it, and if you just need some advice, just ask, but be prepared for the answer you get.