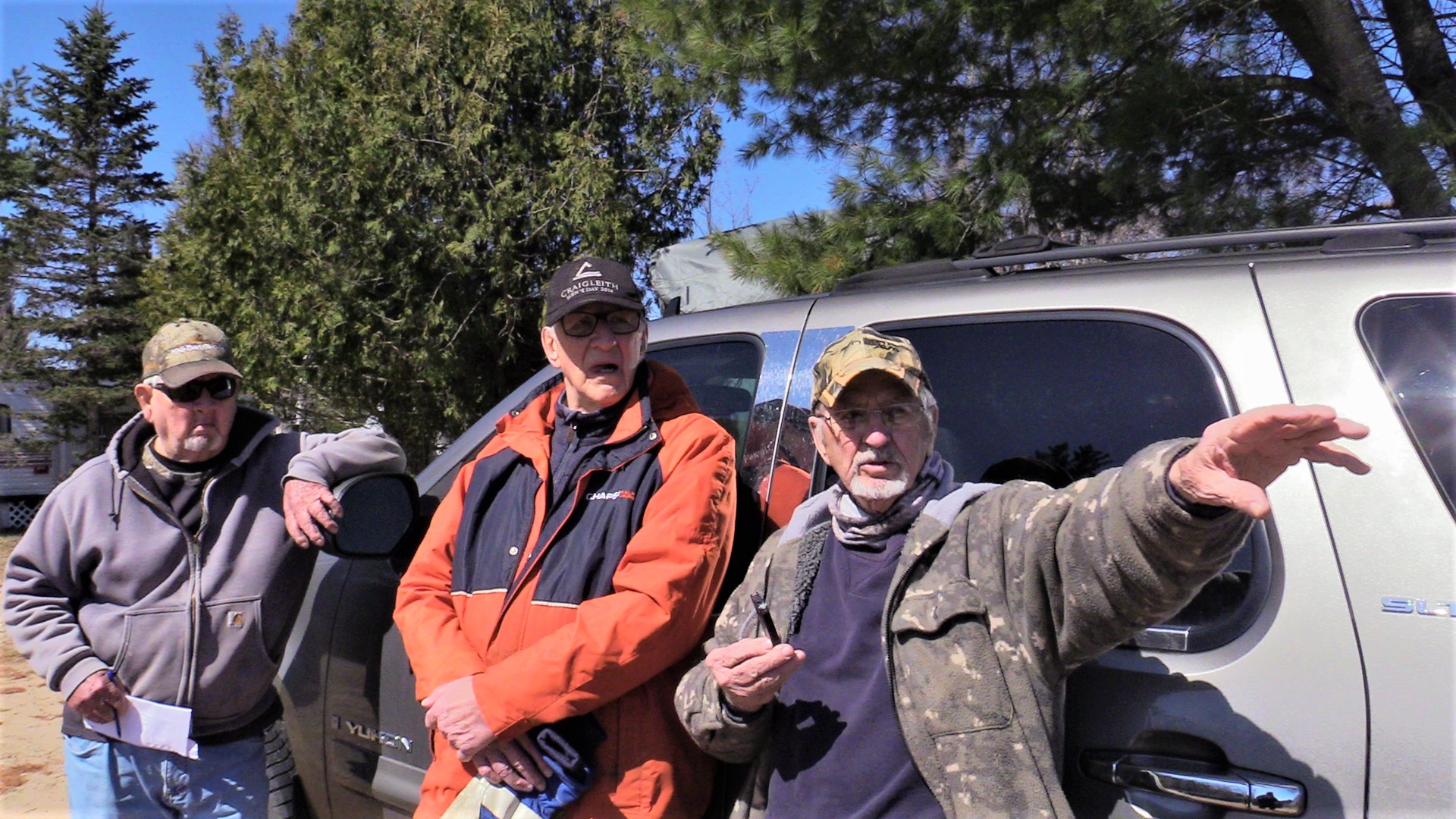 The water level of Lake Talon had extreme swings over the past year and a bit – specifically a major drop last month – that have property owners concerned about the impact on spawning fish, amphibians and access to docks.

Small Town Times met with John Kelsall, Roger Laframboise and Don Paquette to discuss the issues recently, just days after provincial workers added logs to the dam at The Chutes to hold back more water.

Video clips of the interview are combined at the bottom of this article and on the YouTube channel.

And this story was updated May 17 at 10:28 p.m. with more answers from the province and tour on the lake with officials and local representatives. 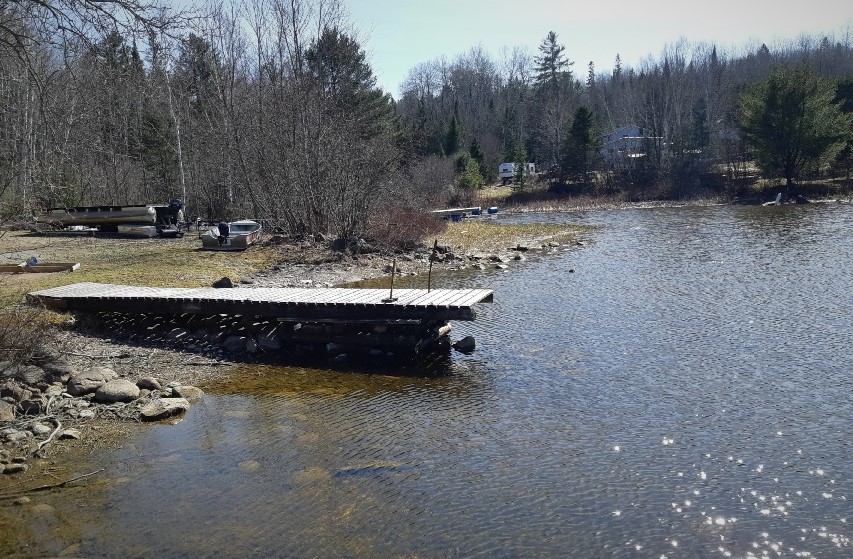 Yesterday the MNR staff responsible for maintaining the lake level of Talon Lake finally put back 13 logs into the 5 sluiceways of the Talon Lake Dam.

The current level of the Lake is well below what the MNRF considers to be their “Winter Low” target level (see Screen Shot attached of the current MNRF web site). To have allowed the lake to fall this low is inconceivable. It has happened before and is becoming more regular.

My well, which ran dry in February, is very close to running dry again. I am not able to park my pontoon boat at the slip assigned to me by Dave Humphries because of the low lake level (Dave is the Talon Lake Marina operator). I can’t access his gas dock. And I am just one of the hundred or more lake customers Dave serves so effectively and humbly. The low lake level has effectively isolated a large part of his marina as well as the public launching pad located at Blanchard’s Landing.

Spawning beds are left high and dry, beaver and muskrat houses are also left high and dry, as well severely impacting fish stocks in the Lake. Simply put what has happened to our lake over the years due to mismanagement of the water level is a catastrophe. Local people such as FN Don Paquette, Elder with the Mattawa North Bay Algonquin First Nation, and FN Elder Jim Green and our past Lake Steward Roger Laframboise and others have all tried to raise their concerns politely to the MNRF and Parks Ontario but to no avail. No one is listening! Everything done is reactive and not proactive.

Speaking for myself (and I suspect many others) I am getting angry at the lack of interest and concern shown by our Provincial authorities. Our beautiful lake is being neglected. There is a desperate need for a management plan to be drawn up and implemented and budgets provided in order to protect this deteriorating yet beautiful historic waterway, lake and wilderness. What is happening is a environmental disaster!

Several property owners on Talon Lake are upset with the water level “mismanagement” and say spawning beds and other wildlife are being impacted.

They say the water dropped well below the desired minimal levels and there is slow response to urgent inquiries.

Is there a management plan for Lake Talon and is it being followed?

What is preventing better management so the level is more consistent for both spawning purposes and property owner purposes?

Mewett confirmed there is no water management plan and no concern about impact on spawning pickerel:

There is no water management plan for Lake Talon. The Ministry of Northern Development, Mines, Natural Resources and Forestry (NDMNRF) operates the dam in accordance to a guideline from 1992 that advises on the water management level during the summer boating/cottaging season to a level of:

NDMNRF operates the dam in accordance to a guideline from 1992 that advises on the water management of Lake Talon.

The spring spawning behavior in fish such as Walleye is dependent on water temperature and when the optimal temperature is reached, the fish will begin to spawn. Fish are designed to spawn in fluctuating depths of water dependent on natural conditions. Most ecosystems experience fluctuating water levels and species are capable of adapting accordingly. As long as their eggs do not become dry, there is no concern for the spawn. With regard to a controlled system like Lake Talon, water levels are generally kept at a consistent level, as opposed to uncontrolled systems due to the presence of an operable water control structure.

Regarding water levels for property owner purposes, dam operations are coordinated to respond to the fluctuation according to spring conditions (e.g. snow melt and rain). 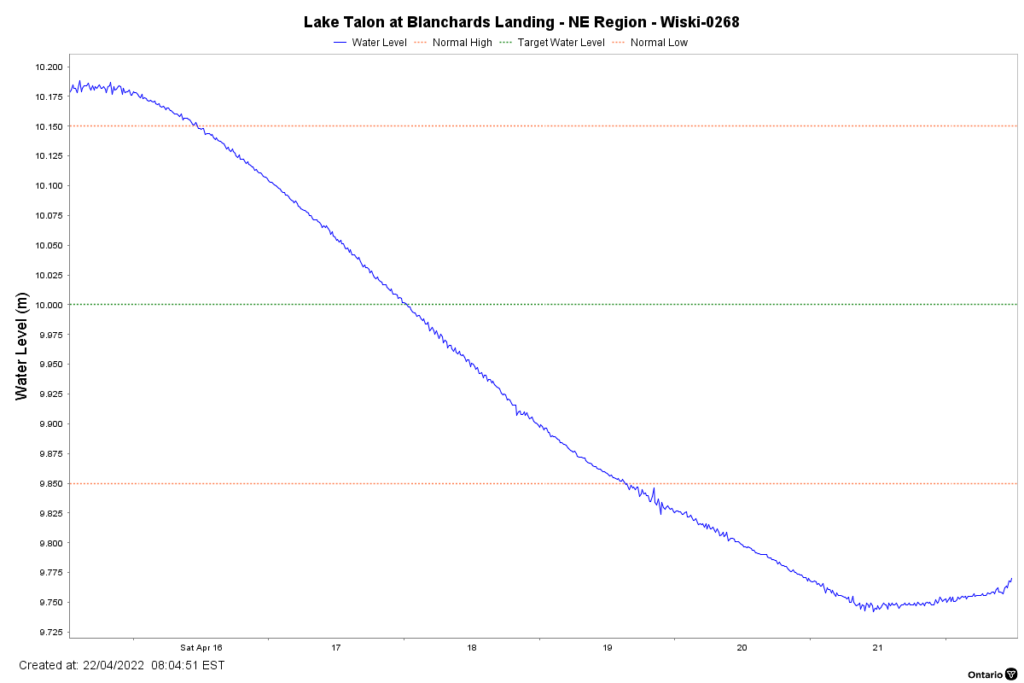 Water levels were both above and below summer operating guidelines for Lake Talon this spring.

On Tuesday, May 10, a couple more questions were asked of the NDMRF to clarify some of the points.

Why was the water level allowed to drop so low this winter? I noticed the guidelines are for summer operating levels, but it wasn’t clear if there are guidelines for fall, winter and spring.

And are non-fish wildlife (frogs, turtles and muskrat), that would be impacted by big swings in water levels, factored into water level management decisions?

And is there a plan to deal with the high loads of silt accumulating recently at outflows and runoff points, as indicated by property owners?

Also this week, Kelsall said Chief Bastien is holding a meeting for concerned stakeholders to discuss the issue.

On Monday, May 16, the Ministry answered my follow up questions:

Q1. Why was the water level allowed to drop so low this winter? I noticed the guidelines are for summer operating levels, but it wasn’t clear if there are guidelines for fall, winter and spring.

A1: The Lake Talon Dam has a summer operating range of between 9.85 and 10.15 local datum, with 10.00 local datum being optimum. The Lake Talon dam has a winter set level that is instituted just after Thanksgiving weekend at the end of what is considered the boating season. Winter set guidelines are designed to draw the lake down to a level of approximately 9.70 local datum prior to freeze up. This is standard practice on artificial reservoirs like Lake Talon to ensure there is room in the lake to prepare for spring freshet. During spring freshet, it is not uncommon for the lake to exceed the upper end of its summer range with all logs out of the dam.

Q2. Are non-fish wildlife (frogs, turtles and muskrat), that would be impacted by big swings in water levels, factored into water level management decisions?

A2: Operational guidelines identify a range that lake water levels are managed within, and this has been done for many years so organisms have adapted to these levels. Many organisms can deal with fluctuating water levels, as they do in a natural system. However to minimize the impact in the fall draw down period water levels are adjusted prior to lake trout spawning to avoid drastic changes post spawn. This also helps other organisms that are preparing for the winter freeze up (i.e. frogs, turtles and muskrat).

Q3. And is there a plan to deal with the high loads of silt accumulating recently at outflows and runoff points, as indicated by property owners?

A3: A meeting is being planned which will include the local Indigenous community, stakeholders, North Bay Mattawa Conservation Authority, Ministry of Northern Development, Mines, Natural Resources and Forestry, Ministry of the Environment, Conservation and Parks and the federal Department of Fisheries and Oceans to discuss concerns raised related to outflows and runoff at multiple points in the area.

On Tuesday, news was posted to the Talon Lake Conservation Association Facebook page:

“This Tuesday afternoon there was an on-site meeting of Biologists from the Federal Department of Fisheries & Oceans and the Provincial Ministry of Natural Resources, Northern Development & Forests as well as the Acting Park Superintendent of the Ministry of the Environment, Conservation & Parks. The Senior Elder of the Mattawa – North Bay Algonquin First Nation was in attendance as well as several veteran Lake Talon residents of over 75 years who were knowledgeable about the fish habitat. There were a total of 11 persons attending.” 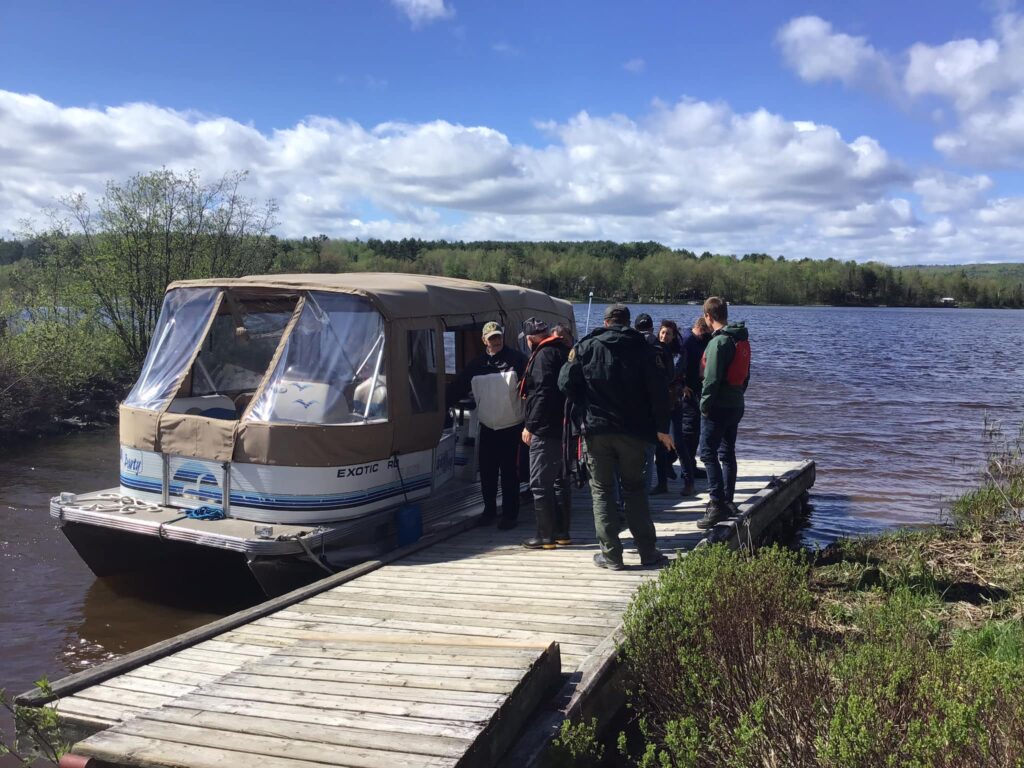 “Former LTCA President John Kelsall volunteered his 22’ pontoon boat to allow everyone to see the spawning area on Sharpe’s/Spark’s Creek up to the waterfall as well as visiting Talon Chutes Dam.
The subjects discussed included siltation, water level control, fish spawning and the condition of Blanchard’s Landing Dock and Boat Ramp.
Many of these important issues are multi-jurisdictional and will require further assessment by the respective agencies and others.
A second meeting is scheduled with the Acting Parks Superintendent in the next few weeks.”

More coverage to come. What questions do you have? Email editor@smalltowntimes.ca