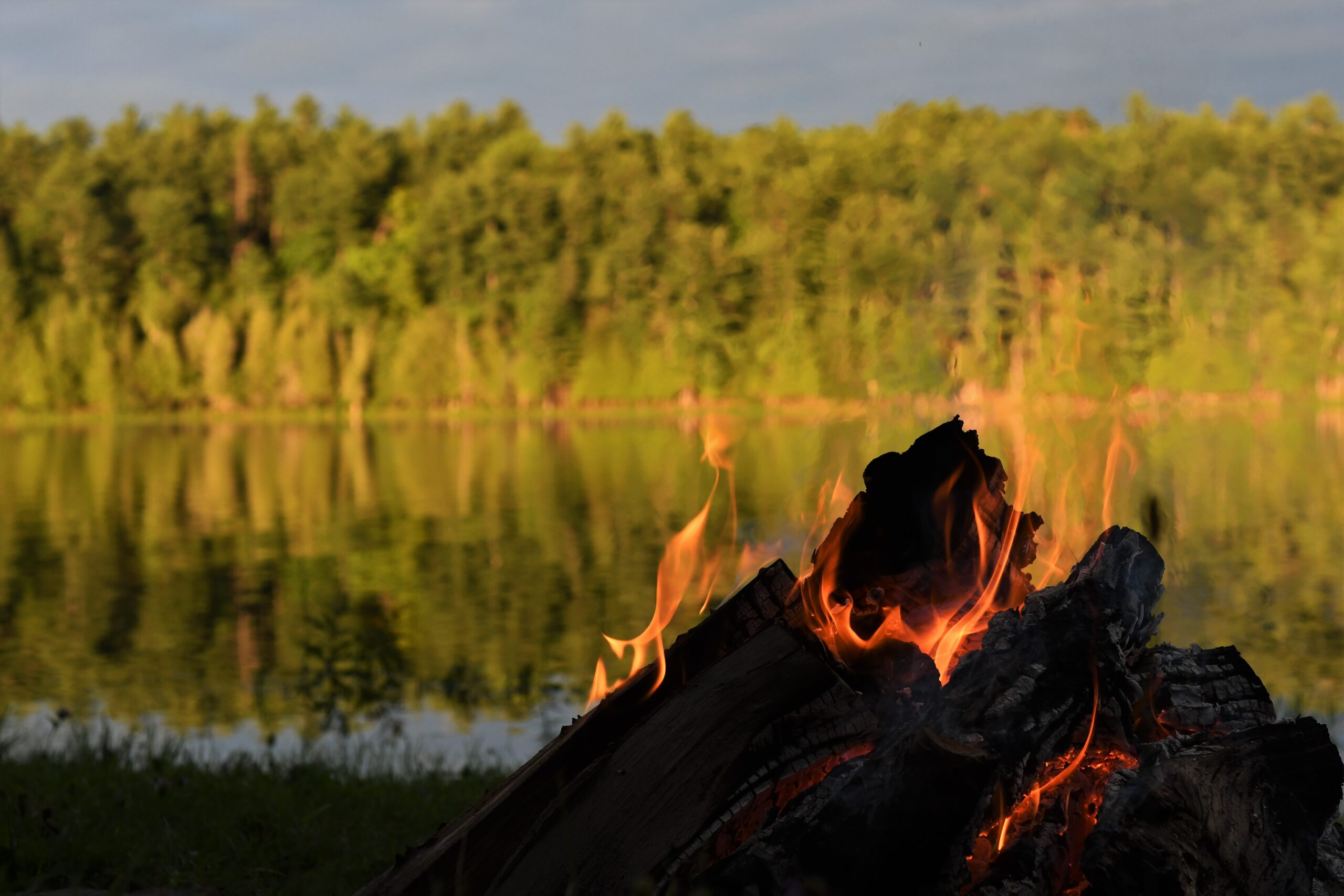 The brilliant British comedian and noted history mangler, Eddie Izzard, says that fire was discovered by a man named Jeff.

While I question Eddie’s knowledge of history (but never her comedy instincts), I like to believe that Jeff was a distant ancestor of mine. Like Jeff, I make good fires. 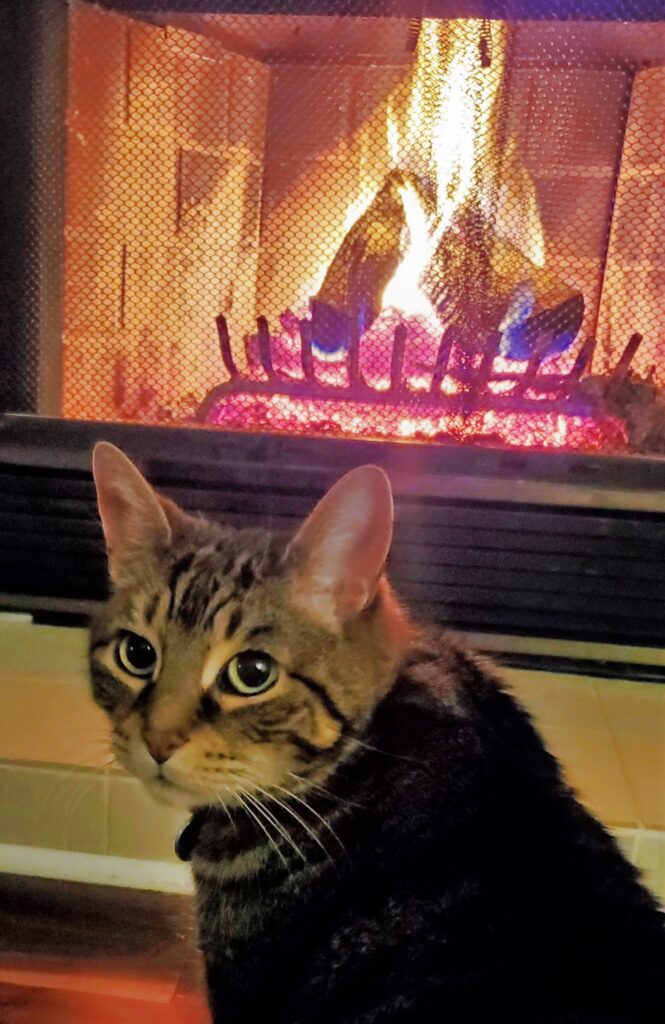 Although never a Boy Scout, I approach making a fire with the enthusiasm of a well-trained youngster, hoping to add a personal achievement badge to my uniform. Unlike a Scout, I have far too many authority issues to actually want to earn that badge. I’d be more likely to throw water on the fire and hope to be kicked out of the corps, yelling that the paramilitary hierarchy is just a construct to keep me from bugging my parents for a new bike.

(Kinda explains my thoughts about organized religion too, but that’s a different fire. No one wants to toast marshmallows over brimstone.)

I’m just an enthusiast for a nice fire. 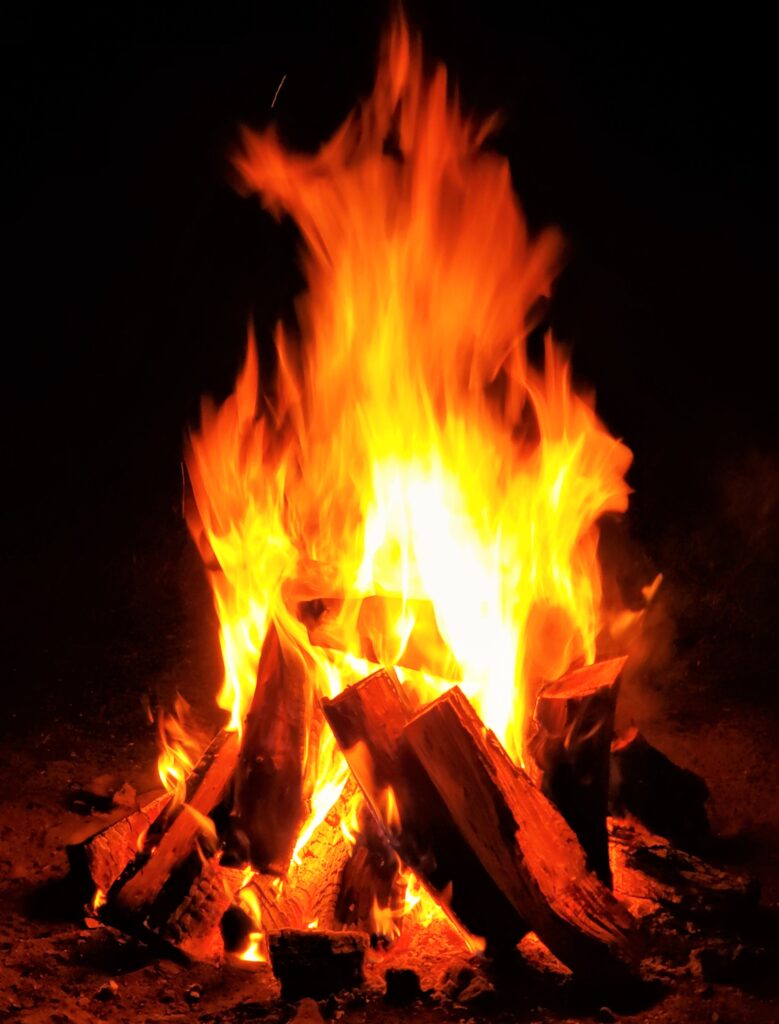 One of my favourite parts of summer is the campfire. The cottage firepit is located close to the river, with a lovely view of the stars and planets over the still water. Well, except in the spring, when the river routinely rises into the pit. Also, not on the breezy nights, when the prevailing winds blow embers into the pine and cedar trees. Oh, and summertime droughts have become a semi-regular occurrence, resulting in level 2 fire bans for weeks on end.

You can see what I’m up against. Having a relaxing campfire requires the right circumstances. 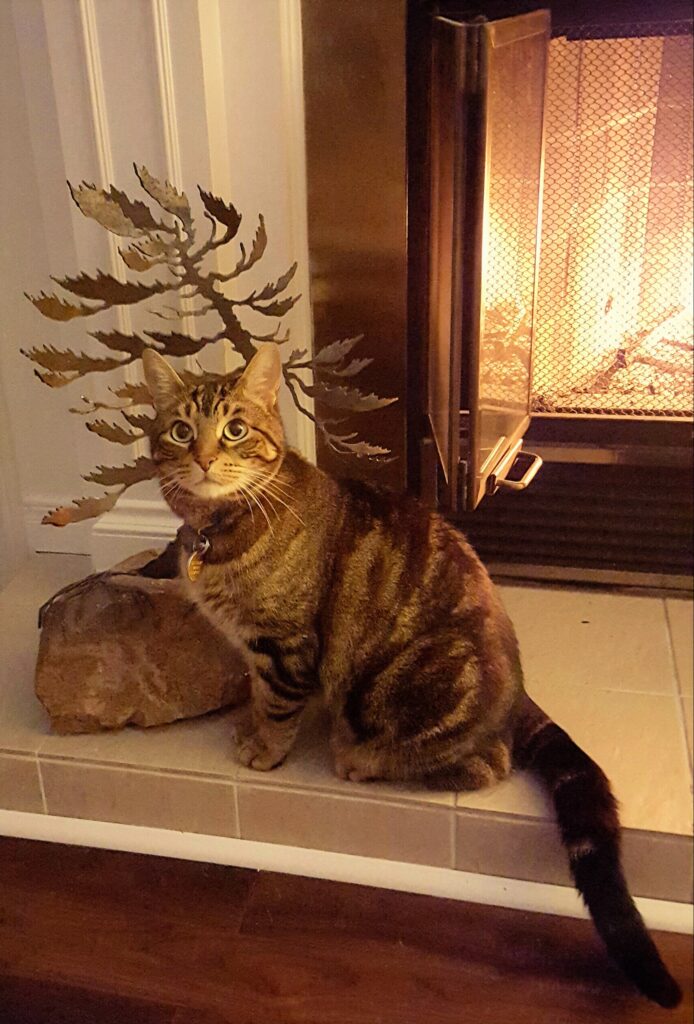 When it’s right, it’s right, though. Gather up paper and kindling, load the wheelbarrow with lots of dry wood, and put a chair or two in place.

Having campfire wood is never issue. I don’t pay for campfire wood. Running low? Don’t worry, the windy storms are there to help, knocking branches off, bouncing them off the roof on their way. Every once in a while, nature provides a bounty of material. That’s a good news/bad news thing, as nature drops the neighbour’s poplars across your hydro line, or pushes a massive tree across your driveway. Nature is like a toddler trying to help out. Thanks, sweetheart, now put the knife down and go see what Mommy’s doing. 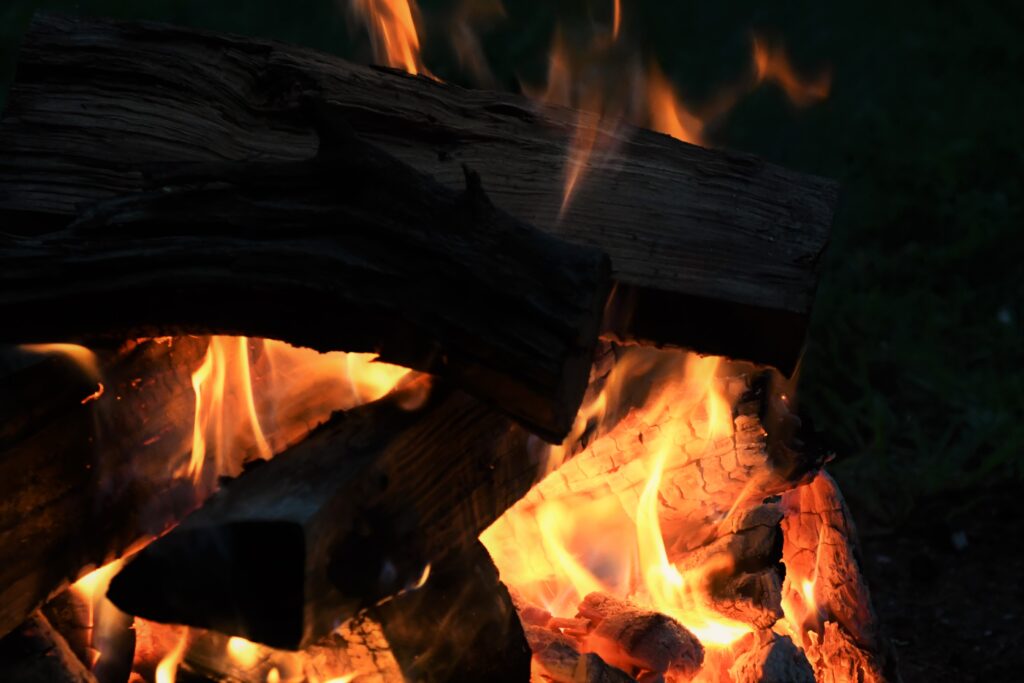 Fire lit and blazing, you can now choose what accessories you’d like to add. For me, it’s usually music. It can be chosen to suit the mood and the company. My wife and I like to sing along, so it’s good to have neighbours that are sound sleepers. Classic 70’s bands feature prominently in the mix, with lyrics that we mostly remember. Rollicking songs from the east coast are always a good idea, as sometimes we’re bound for Liverpool, sometimes we’re bound for Spain. John Mann singing of a postcard with a picture
of Marini’s Little Man with an erection on a horse, brings some humour from the west that really does always leave me laughing. 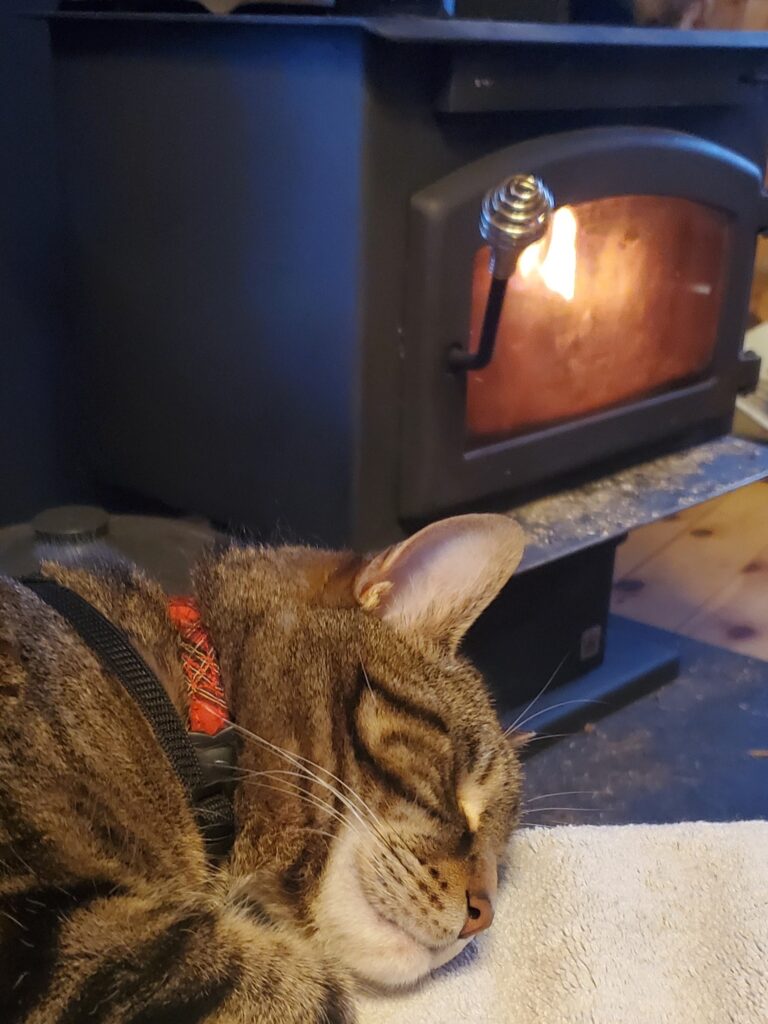 If it’s me alone, I tend to go a little quieter, with a selection of singer-songwriters, often finishing the evening off with Oscar Peterson, live in Paris, playing Nighttime. If the cat is with me, the playlist doesn’t change, as he’s busy chasing frogs in the dark until it’s time to warm his bum on the ground close to the embers. He doesn’t seem to notice the music, except to maybe stop and stare at me singing King of Spain, a look on his face that says, “Really? Again?”

Unlike when I’m splitting the wood that’s happily blazing in front of me, I don’t really think deep thoughts while staring at the flames. To me, that’s part of the appeal. This is not problem-solving time. This is time to just enjoy the moment, the payoff for sweat it took to get here. 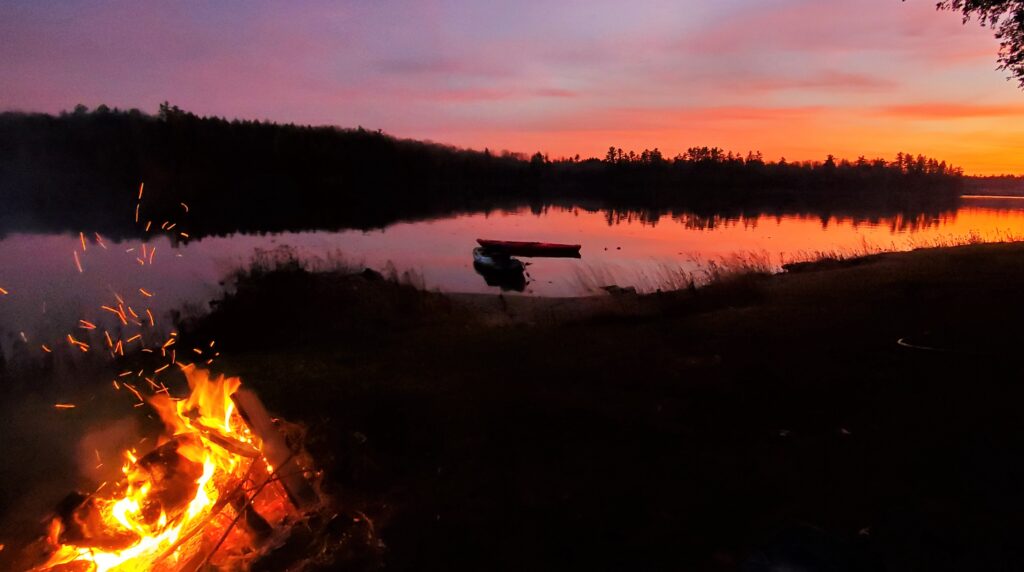 As evenings get shorter and cooler, the appeal of the campfire lessens and the practical warmth of the woodstove calls indoors. We no longer sit and stare at the glow, though it is nice to be able to glance over and see it through the sooty glass of the woodstove door. This is time to curl up on the couch and watch movies and box sets that we don’t have time for in our busy home.

The current woodstove is one in a line of heat sources that stretches back to my childhood. Previous versions tried in vain to make a dent against a lack of insulation. Now, with insulated walls and ceiling, it’s easier to be comfortable, unlike the old days where moving the rollaway bed up to the cook stove was the best option to stave off certain death from shivering.

My oldest memory was a lovely Findlay cookstove. It didn’t hold a lot of fuel, but it made up for it with charm. It also provided one of the strangest memories of my father.

I don’t know how I did it, but I managed to talk him into taking me to the cottage for a night. The cottage was a Sunday afternoon pastime – fishing and barbecue after church, then back home in the evening. And yet, somehow he and his pre-teen, non-Scout son, found themselves up there, staring at the old stove, contemplating a fire.

Looking back, what surprises me most is that he seemed completely unprepared for this moment. There was a small supply of firewood, yes, but no kindling, no paper. He had matches for his ever-present pipe, but none of the materials needed to turn that small flame into a larger one. Unlike now, where I could go to the shed and grab a butane or propane torch, the place was bereft of ideas.

His solution was flammable liquid. We put a block of wood into the stove and splashed some naphtha on it. As he lit the match, he said, “As soon as I throw it, drop the lid.”

The resulting WOOF promptly blew all the lids right off the stove, revealing the still unscorched block.

In the end, we managed a fire, thanks to the page by page destruction of an Archie comic. He never spent another night there.

The cookstove eventually found its way to my brother’s house, a trade for a homemade box stove, manufactured by a welder friend who didn’t grasp the basics of air draft theory. My brother then sold the stove with his house. I’m still a little ticked about that, over 30 years later. 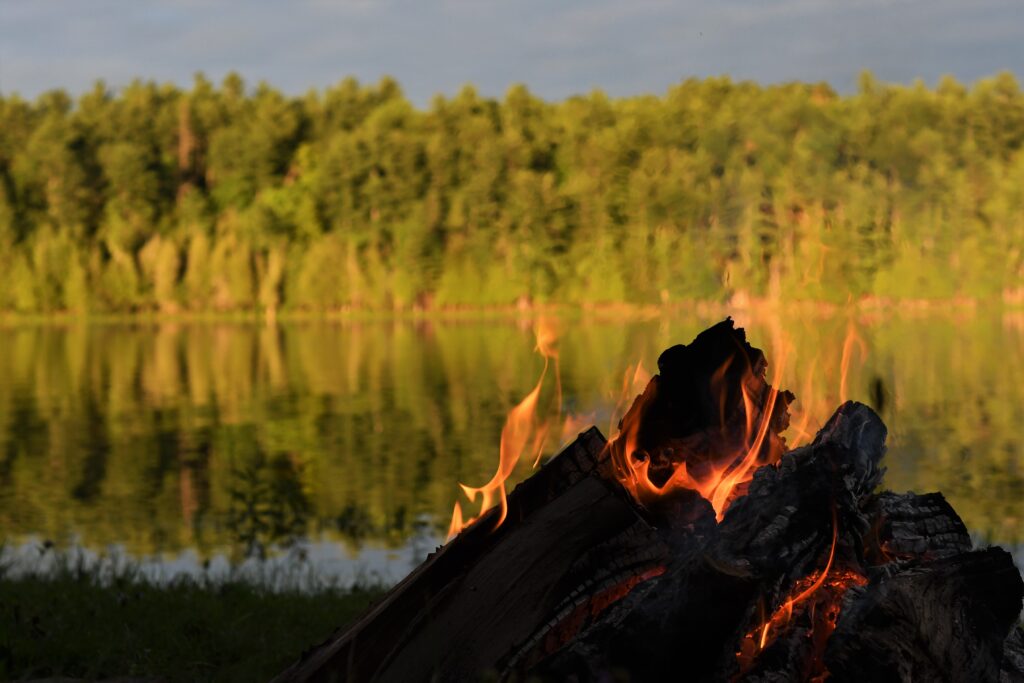 Inevitably, the cool evenings of autumn turn to the cold nights of winter. Then it’s time for the fireplace at home to shine. One of the few wood-burning fireplaces still in our neighbourhood, we considered it a feature, not something to be replaced with a gas insert. Each year, I bring old recycling bins of firewood home from the cottage supply, filling a rack in the garage. The crackling fire helps to get us through the season we like the least. No one really likes winter, not in this area. Sure, some say they do, but people say a lot of stupid things.

As much as I enjoy the warmth of the wood heat inside, it doesn’t take the place of the fire by the river. It’s an atmosphere that is hard to duplicate. My wife and I will often turn the music down and chat by the glow of the fire as the cat draws near and snuggles in. There’s something in our DNA that goes back thousands of years, ancestors telling tales of the past and plans for the future while together, huddled around the warmth provided by some guy named Jeff.