The Gateway Theatre Guild has written a solid script to celebrate its 75th anniversary in 2023 – and the first act is already underway with pent up energy after a two-year forced hiatus from the stage. (This feature was first published in the Fall 2022 Edition of Back in the Bay Magazine, released Sept. 25.)

Playing a lead role was the COVID pandemic, of course, but it was also due to lack of home theatre options. A non-public venue would be a Godsend, some say.
Regardless, the show must go on and the GTG is determined to make its Diamond Jubilee an event worthy for one of Ontario’s longest running companies. A new focus on
nurturing local talent is a big part of it, while also reaching out to benefit isolated seniors with the first forays held in September. And there are several more events scheduled through the fall and winter.

Next year, a massive installation at the North Bay Museum is planned, an ambitious feat aided by tons of archival material being donated recently – including seven large display folders overflowing with material dating back to the Guild’s 1948 foundation. Curator Naomi Hehn also rescued six large envelopes of relevant clippings during the Nugget office purge this spring. The windfall has sparked a full-fledge Archive Project with funding proposals aiming to digitize the collection and provide it online for additional preservation, as well as sharing the important theatrical history with the public.

It’s been a journey for all involved these past few years, so it’s apt that the first staged productions will be at the beautiful Odyssee theatre, beginning with Einstein, written by Gabriel Emanuel and directed by Paul Monaghan. Rick Blair is in the lead role Oct. 19-22.

Next up is Leaving Home (1972) by David French, also at Odyssee, with Tania Webb directing Nov. 30-Dec. 2. It’s part of a series of three full-length plays known as the Mercer Family Trilogy by the renowned Canadian playwright.

The plays focus on the Mercer family, originally from Newfoundland but now in Toronto and navigating life challenges and strong family forces. Each play takes the audience on a journey of love, loss, and forgiveness. The second one will run early in the 75th anniversary year, entitled: Of the Fields, Lately (1973). In the spring, Salt-Water Moon (1984) will be directed by Johanna McPherson. 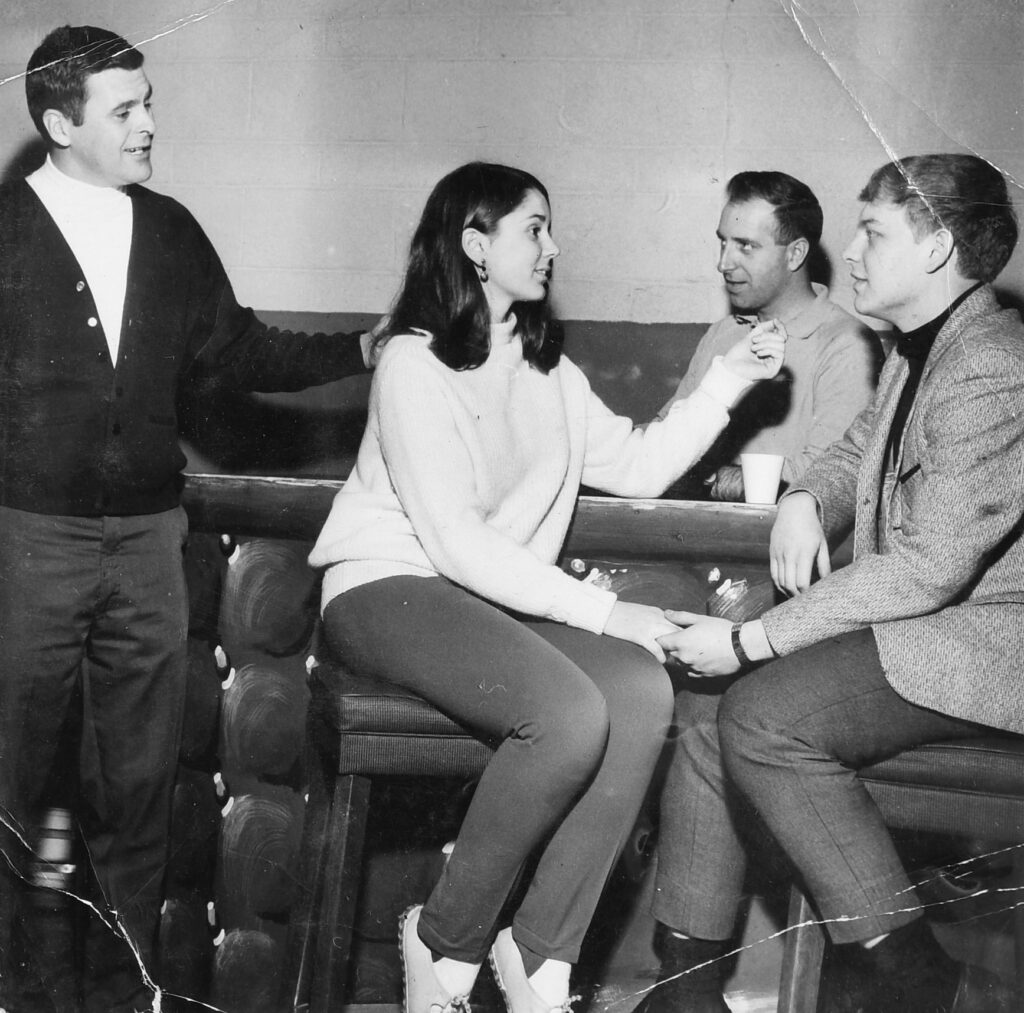 Gateway Theatre Guild cast members in 1968 promoting their production of Tennessee William’s Streetcar Named Desire, directed by Marjorie Turnbull, which would open at the Canadian Forces Base Theatre.

The Gateway Theatre Guild’s new Grapevine newsletter points out that each play will be staged by a different team, but a common thread will weave through the entire season.

In addition, the Guild is initiating a new focus on the local creation of new works with readings and showings of new works-in-progress. The idea is to both spotlight the many writers and creators in the North Bay area while also creating a space to nurture potential full productions. You could call it an artistic incubation program: “Locally
created new works will receive at least one ‘private reading’ designed for the author to hear their new work read aloud by actors,” with the authors having access to feedback from the actors and artistic working group if they want.

The first New and Local: New Performance Works scheduled was a staged reading of Terre Chartrand’s Estrange(ment) held at the Big Medicine Studio as part of the Nipissing Culture Days.

The first Play Readings With/For Seniors was scheduled to be at the Trinity Church (Fireside Room) featuring Jitters, also by David French, with monthly meetings the goal.
Another example is Dec. 14, with Fun at the Davedi Club offering a “staged reading” event of an Italian restaurant comedy while eating Italian food. Other scheduled Play Readings With and For Seniors so far are: November 24, December 15, January 26, February 23 and March 23.

Ernie Taylor, famed artist and teacher, had the creative hand behind this Fall 1977 Gateway Theatre Guild poster for Mister Roberts, a nautical comedy about salts and sailors with their eyepieces on an island full of nurses directed by Bob Clout. Some of the main characters were portrayed, from left: Bill Mainer as Lieut. J.G. Roberts; Hugh Anderson as Doc and Dave Perkins as the Captain. At centre is Jim Calarco as Ensign Pulver. 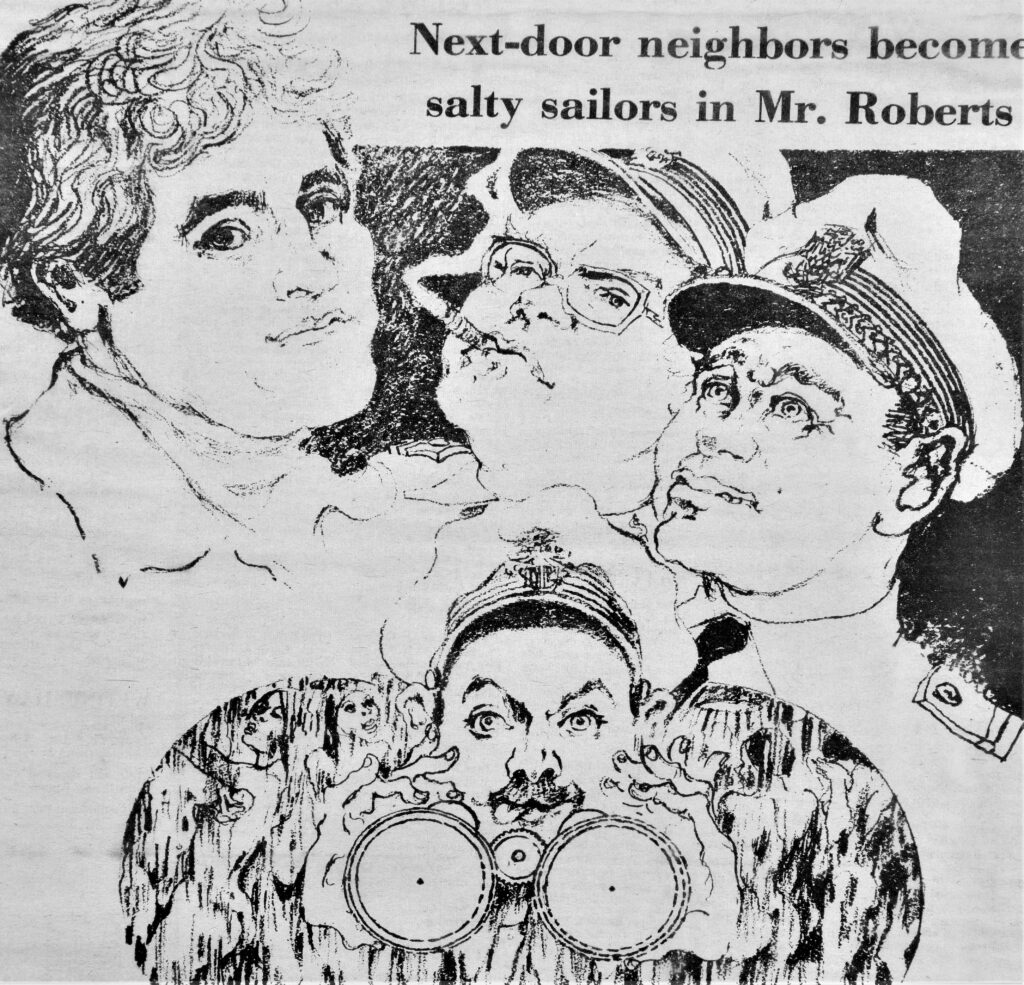 The Guild had hosted QUONTA earlier in 1977 at the West Ferris Secondary School (recently closed and empty with the perfectly good theatre roped off from use). The productions were advertised with admission price of $3 in advance, $3.50 at the door with minors and seniors charged $2. Season pass was $7 and Patron $35. After Mister Roberts in November 1977 was Arms and the Man directed by Joyce Johnson in March 1978 and Sound of Murder directed by Jim Murray mid-June.

In the 1948 inaugural season, one of the plays was the Gateway Gaieties, produced by Steve Franklin, Phyl Derry was stage manager, Madelene Parks the dance director,
with hairstyling by Dolores Hodgins of the Maye Hodgins Hairdressing School at Lillian’s Beauty Salon. Make up was by Margaret Paterson, June Tippins, Gladys Murphy of the Avalon Beauty Shoppe with Dolores Hodgins and Mrs. G. Lyon. 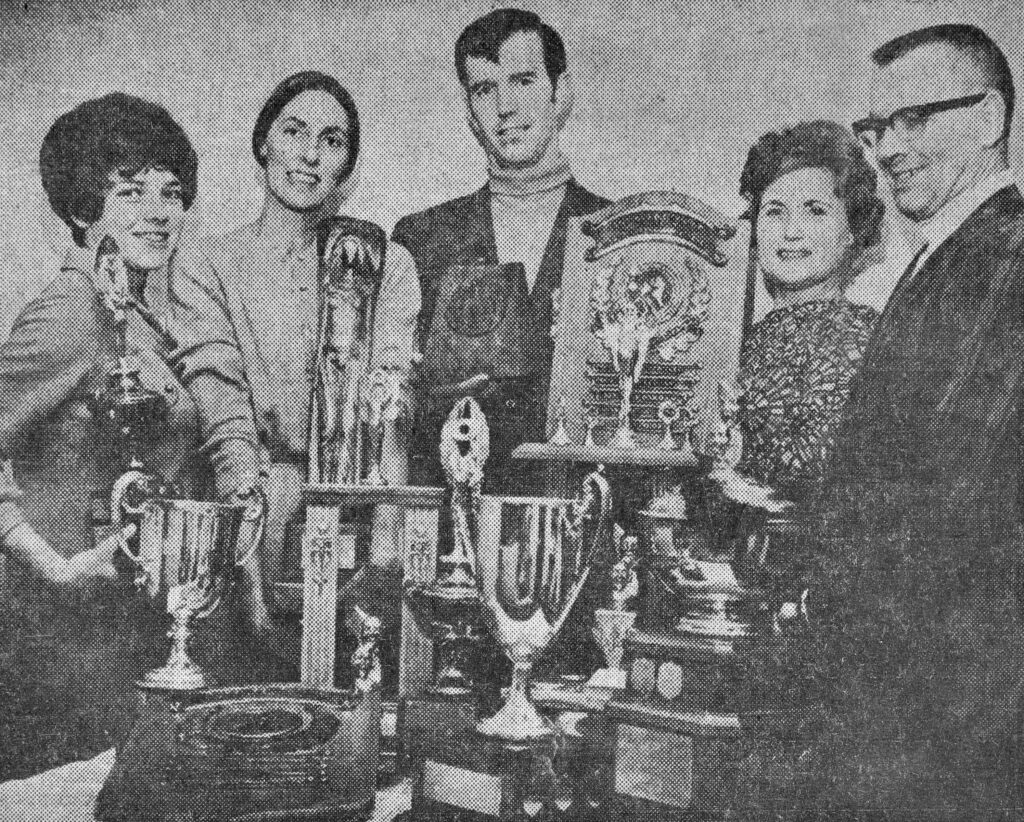 In another Nugget clipping (above), Quonta trophies are displayed with five past winners from GTG posing with them hosting the regional in 1969. There’s Joanne (Scott) Bernier with the City of Sault Ste. Marie Trophy for best performance as an actress “Cherrie” in Bus Stop in 1968; Joyce Johnson with the DDF Regional Trophy “Compassion” for the best play which she directed in 1965, Under Milkwood; Ron Payne with the ‘Gordon Lee Award” for the promising actor as “Bo Decker” in Bus Stop, 1968; Jinx Barham with “The Avery Plaque” for the best supporting role won for her varied roles in Under Milkwood, 1965; Tom Smith, 1969 GTG director, with the Justice Landreville Trophy for the best English play of the festival – which he and his cast of “Picnic” hope to win. Also in the photo are the Director’s Award won by Mrs. Johnson in 1957 and in 1965, and the Avery Plaque won by Richard Morgan, plus other awards won by the Guild in 1965.