Just in time for a Christmas stocking stuffer and ice hut read, the Winter 2022 edition of Back in the Bay Magazine is hot off the Beatty Printing press with the first big wave of circulation beginning Dec. 15.

The cover captures 1940s winter spirit with the Tweedsmuir Argo Service Station hockey team in front of their school when it initially faced Lakeshore Drive. In the photo is North Bay Sports Hall of Famer Ken Warram, who grew up to be an NHL star with his induction biography republished on Page 31. 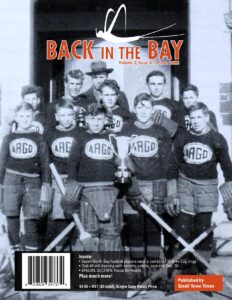 Also featured in the magazine is North Bay’s Grey Cup connections with seven football players and a coach holding a combined 12 CFL championship rings. Nancy Avery concludes her City Hall memories series with a look back on her time working for mayors Jack Burrows and Stan Lawlor; while Pat Madill Stamp shares memories about her time as a young student making a presentation at the Teachers College/Normal School. 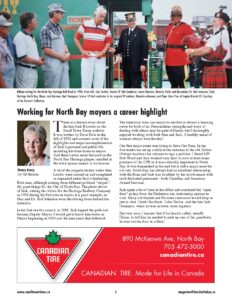 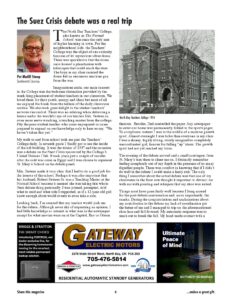 Ian Saunders describes growing up in the Heritage Milne Home on Copeland Street and Dave Saad puts the focus on the city’s hosting of the 1977 Ontario Winter Games, leading to many more hosting opportunities in the 1980s and 90s. And Natasha Wiatr described the volcanic beginnings of Callander Bay, and new contributor Sarah Fudge’s Fine Kettle of Fish cooking blog artfully describes how to make soup out of all your leftover vegetables. 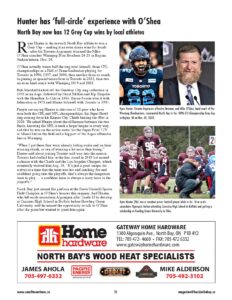 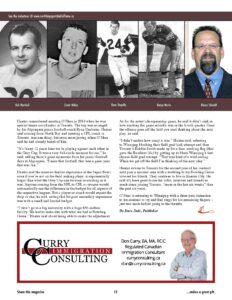 Our top priority for 2023 is to conduct as many interviews with local treasures as possible, similar to a recent session with Bob Moynan, 91, which is featured in the Winter 2022 edition editorial. The series of interviews next year (and all the previous ones) will be part of a collaborative effort to celebrate North Bay’s centennial birthday in 2025. 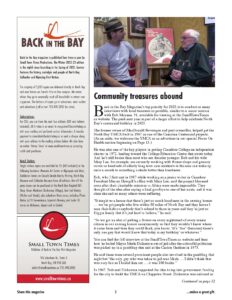 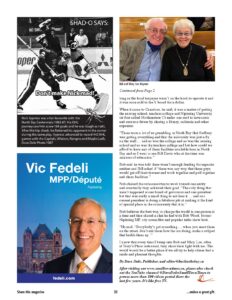 The former owner of MacDonald Beverages and past councillor, helped get the North Bay YMCA built in 1967 as one of the Canadian Centennial projects. As an aside, we welcome the YMCA as an advertiser in our special Focus On Health section beginning on Page 13. Moynan was also one of the key players in getting Canadore College an independent charter in 1972, leading toward the College Education Centre that exists today.

And he’s still busier than most who are decades younger. Bob and his wife Mary Lee, for example, are currently working with flower shops and grocery stores so hundreds of elderly long term care residents in the area can wake up once a month to something a shade better than loneliness. Bob, who I first met in 1987 while working as a junior writer in Canadore President Murray Hewgill’s office with Mary Lee, said the project bloomed soon after their charitable missions to Africa were made impossible. They thought of the idea after saying a final goodbye to one of her aunts, and it was clear she and so many others were suffering.

“It taught us a lesson that there’s just so much loneliness in the nursing homes … we’ve got people who live within 50 miles of North Bay and they haven’t seen their kids or anybody that’s related to them in years and they’re just so friggin lonely that it’s just hard to believe,” he said. “So we got an idea of putting a flower on every nightstand of every senior citizen in our nursing homes anonymously, so that they wouldn’t know where it came from and then they could think, you know, ‘It’s “Joe” (because) there’s only one guy that would know that today is my birthday’ or whatever.” 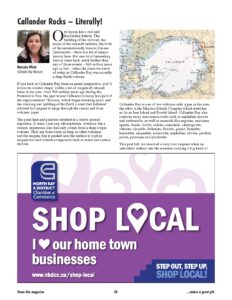 The Winter edition also features a Focus on Health section meant to inspire readers to think about how they can nurture their mind, body and spirit. Related video interviews, promoted in the section, include Mitch Dokis, of Green Medicine, and Nicky Poulin, of OHANA Yoga and Wellness Centre, who shared their personal healing and teaching journeys with SmallTownTimes.ca editor Dave Dale. In the coming months, we hope to feature more just like them to promote and motivate everyone to take an active role in their own health. 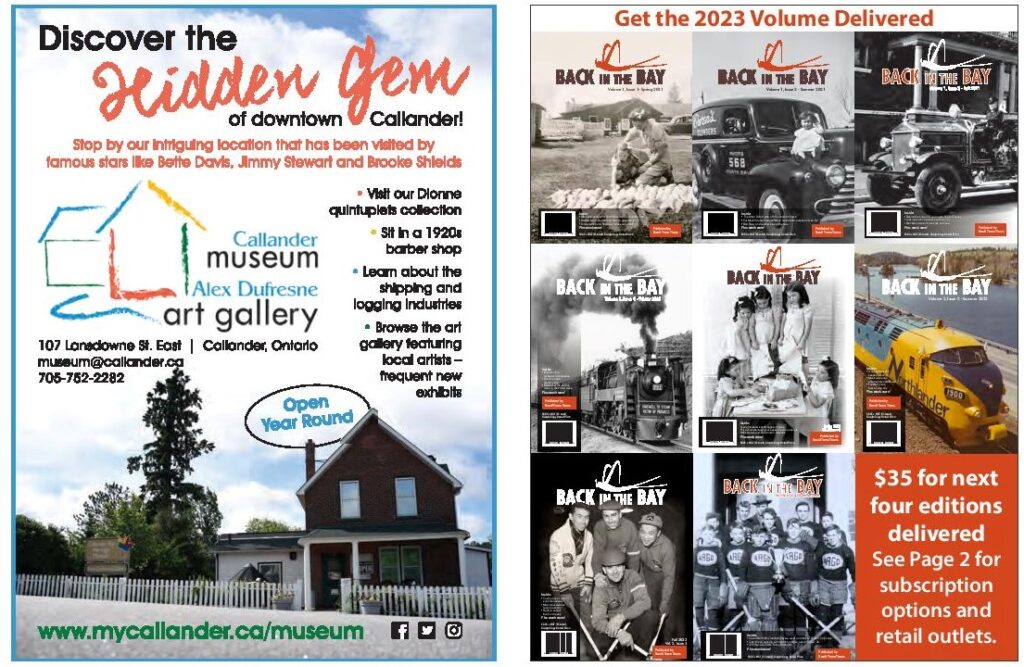