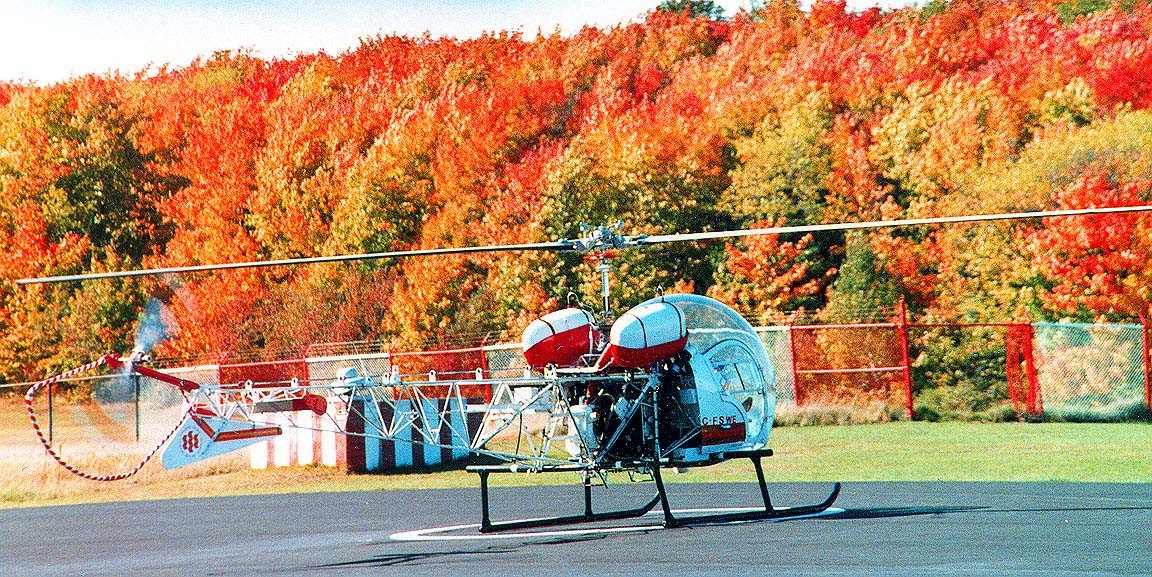 Back in the Bay Magazine clear for liftoff

There are 6,000 copies of the inaugural Back in the Bay Magazine rolling off the Beatty Printing press Monday, May 3 and circulation of the Vol. 1, Issue 1 Spring 2021 edition begins Wednesday, May 5.

It’s a very exciting achievement for all those involved in producing the 36-page publication. We hope the quality of the printed product and content meets your expectations. So much was packed into the magazine and double that amount is left over to start the Summer Edition to be published July 1. If you haven’t already, you might want to read Behind the 3 Amigos of Logos for the backstory on the Soaring Shadfly, Retro Stamp and Website Red Dot. And there are videos explaining the magazine concept, origin of name, etc. on the Editor/Contact page.

Getting this first edition together sure was an interesting journey, from picking the name to getting the logos designed to the interviews and story teller coordination, it will make a cool story some day. 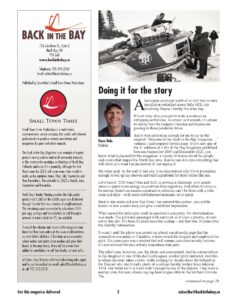 To benefit our advertisers, 5,000 copies are being delivered to various North Bay neighbourhoods as free samples by Canada Post. We figure at least 10,000 people will read the magazine and likely more as it’s saved and shared in the future. The quality of the print job and variety of local content is geared to ensure the magazine will be kept around longer than most other periodicals.

The other 1,000 copies go to advertisers (they are allotted as many as 10 copies each as a gift for their customers), retail sale outlets and subscribers. More than 100 will be mailed or delivered to subscribers of A Bit of the Bay Magazine, which ceased publication after 11 editions December 2020. Those who are still owed issues will receive Back in the Bay Magazines unless they would prefer a refund.

Below is the Spring 2021’s table of contents. Hopefully it entices you to either subscribe, order for local delivery or pick up a copy at a retail outlet: 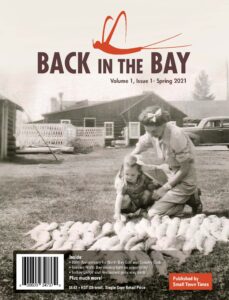 The cover features Torbay Lodge with a nod to Mother’s Day. In the photo is Nancy Avery and her mom Margaret Farrow checking out the total catch by the cottagers in the mid-1940s. The story on pages 3-4 is about her grandmother Alberta ‘Birdie’ Farrow, who ran the Torbay Lodge and Chicken Bar outfit beginning in 1936. 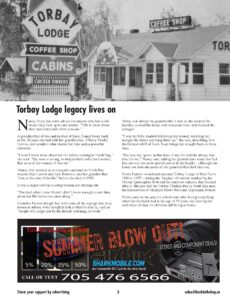 Back in the Bay bumped into Hariett Madigan on Earth Day and the discussion was about the success of the Clean, Green and Beautiful litter pick-up campaign. It led to how the various groups are getting together for another run at the Communities in Bloom showcase contest, starting with provincials in 2022. 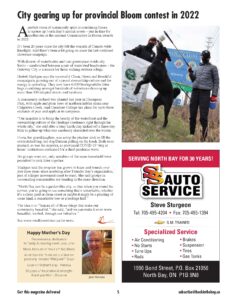 A look back at some of the motor sport history in the area centred on Gary Harling’s racing memories and highlights during his era at the North Bay Speedway. 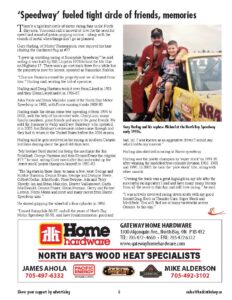 Celebration of the North Bay Golf and Country Club’s 100th anniversary began April 29 and there’s a four-page spread about its history and characters involved. 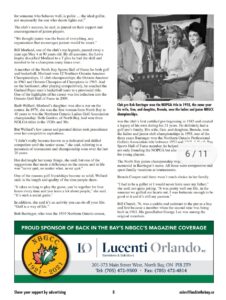 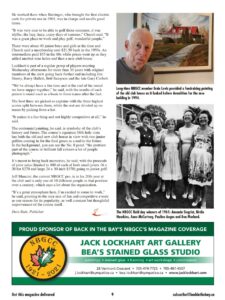 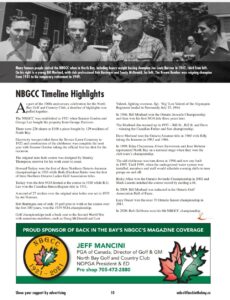 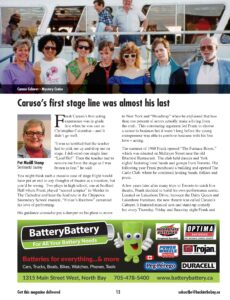 And the North Bay Museum focused on the William Forder photography collection with hopes to inspire today’s photographers to do the same.

One of the anchor advertisers making the magazine possible is Tourism North Bay, which hired the Small Town Times Production to create a four-page Spring 2021 newsletter as the magazine’s centre spread. It also paid to have an extra 1,000 copies to printed and circulated, topping the circulation to 6,000 (the largest verifiable circulation of a magazine in North Bay). 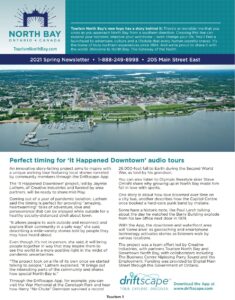 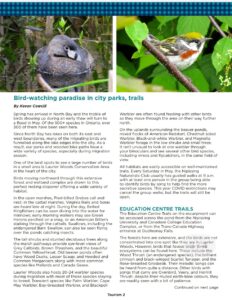 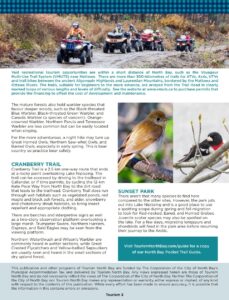 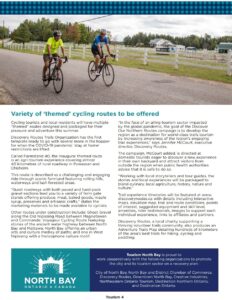 Pam Handley’s Heritage Matters column paddled into historical waters with the Voyageurs coming through this area, including the La Vase Portage. 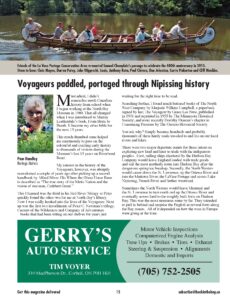 Check out the five Mother’s Day messages on Page 17. 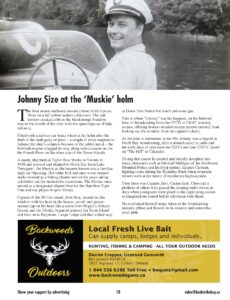 Johnny Size steers the ‘Muskie’ was written by his son John Size. It captures the essence of the television and radio personality many people in North Bay remember. 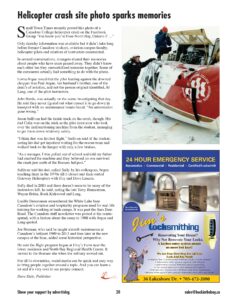 Helicopter crash sparks memories stemmed from a quest for more information posted with an old photo on a Facebook group page called “You know you’re from North Bay, Ontario if you remember…” 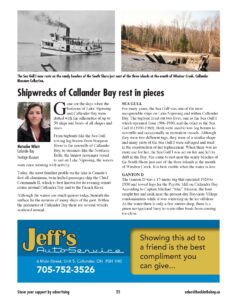 The feature on Erin Chassie is interesting and inspirational at the same time. Chassie was best known in North Bay for breaking down gender barriers as the first female AAA minor bantam goalie in 1988-89 and now, 32 years later, still loving to work with a team but for the past 20 years is about saving hearts in an operating room. 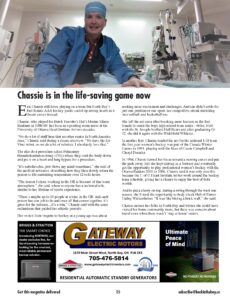 Near the back of the magazine, you’ll find an old Canadore College faculty team pic from 1974. You’ll recognize some faces if not the names listed below.

Of course, what’s a magazine without an editorial mascot. Meet the dry and sarcastic wit of Shad-O. 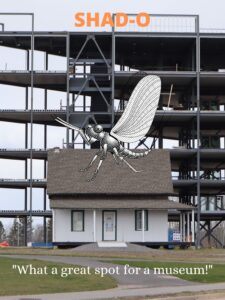