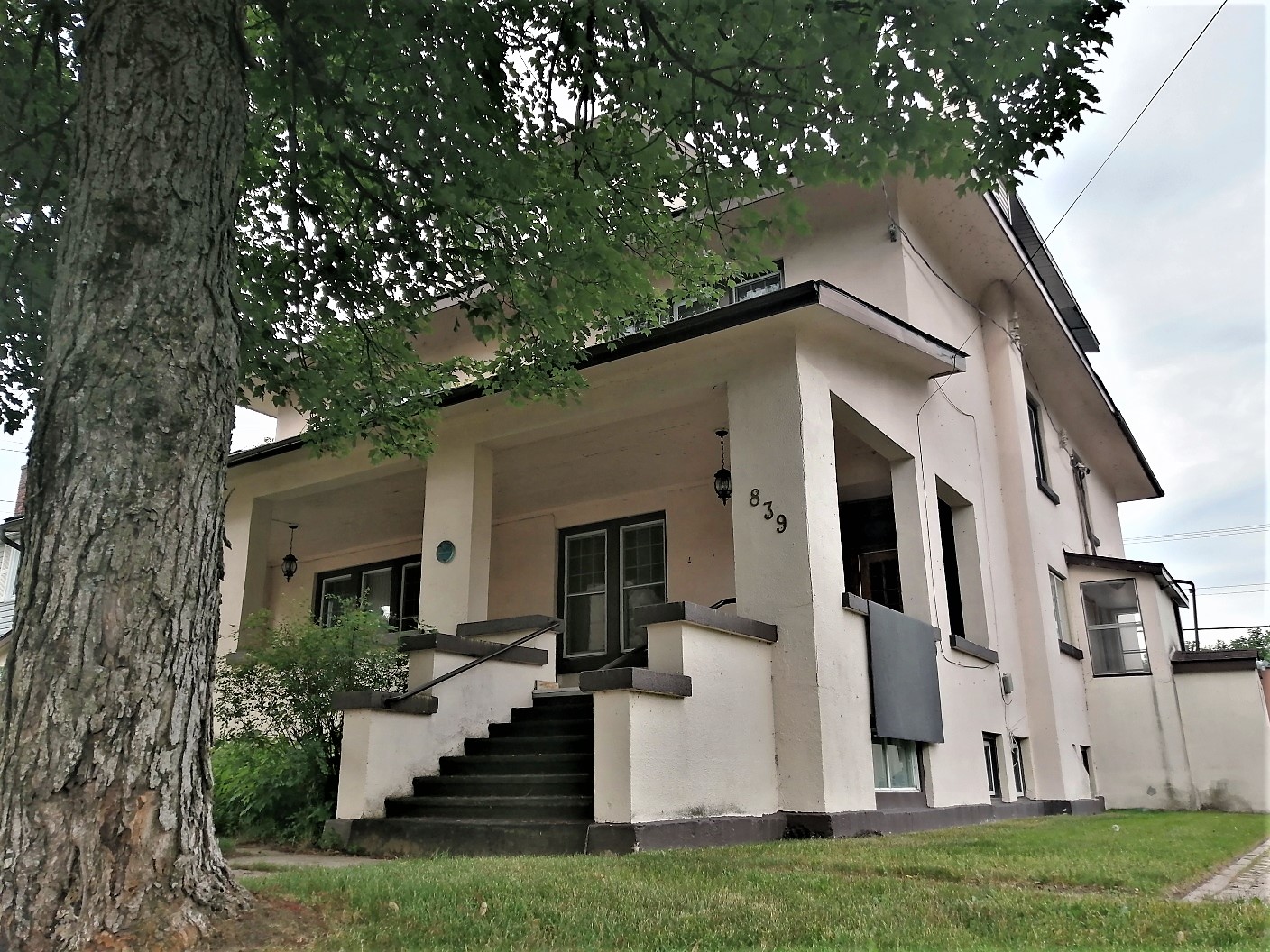 My name is Ian Saunders. I was born in North Bay in 1942, and lived there for two decades. I’ve put down some recollections, and will share these memories here in the Back in the Bay magazine.
These are adaptations of chapters compiled over a number of years, which I wrote in recognition of the fact that it’s a sad reality that when a person passes away, the knowledge of who that individual was dies with them. I wanted to do something to avoid that. I’d love to hear feedback (and your stories) from readers, so contact me at: iantsaunders2018@gmail.com

Well, let me begin. While it might seem logical if I started out with my birth, upon reflection I think I should first tell you how my parents (and ultimately me) came to be in the Bay. My apologies. Actual recollections of life will start in a future chapter. 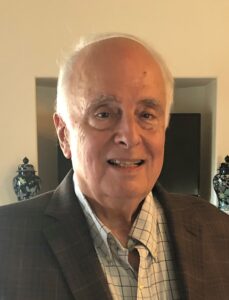 My dad, Tom Saunders graduated in 1922 from U of T’s Engineering School with a Civil Engineering degree. He immediately joined the Canadian National Railway’s Engineering Department in Toronto. By 1939, he was a senior member there, and there was talk of a promotion which would take him to Montreal. It would be a good career move, but he naturally had reservations about it. He’d been seeing my mother, Ruth, for about four years, and they planned to marry, but no date had been set. And mom wasn’t thrilled about moving 350 miles from family and friends. But as sometimes happens, fate had other plans.

At the meeting of the American Association of Railroads held each December in Toronto, dad had a chance meeting with an acquaintance, S.B. Clement, Chief Engineer for the Temiskaming and Northern Ontario Railway, the third largest railroad in Canada, which had its southern terminus in North Bay. Clement planned to retire in three years and needed to train someone to take the position of Assistant to the Chief Engineer, and assume the Chief Engineer position three years hence. Was my father interested in the job? 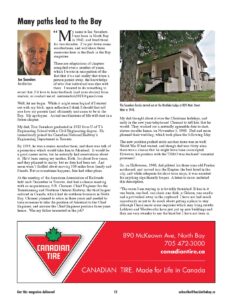 My dad thought about it over the Christmas holidays, and early in the new year telephoned Clement to tell him that he would. They worked out a mutually agreeable date to start, eleven months hence, on November 1, 1940. Dad and mom planned their wedding, which took place the following May. The new position pushed aside another issue was as well: World War II had started, and though dad was thirty-nine, there was a chance that he might have been conscripted. However, his position with the TN&O was declared ‘essential personnel’.

So, on Halloween, 1940, dad piloted his three-year-old Pontiac northward, and moved into the Empire, the best hotel in the city, and while adequate for short term stays, it was unsuited for anything significantly longer. A letter to mom included this description, “The room I am staying in is lavishly furnished. It has in it one basin, one bed, one chair, one desk, a Gideon, one candle and a pot tucked away in the cupboard. I have not had much opportunity as yet to do much about getting a place to stay although I have made some inquiries which may bring results. Loblaws and Woolworths have just put up new buildings and they are very swanky to say the least but I have not been in them to do any bargain hunting …”

Dad started a search for an apartment that he would live in, to be joined by mom who was still in Toronto. He found one in an old house at 839 Main Street West called “The Westlake”. 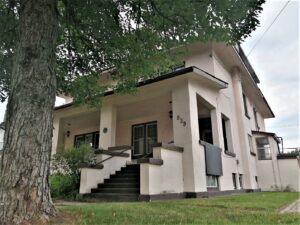 This would be their home (and mine) for the next few years. I’ve looked online at a photo, and it still looks pretty much like it did back then.
Well, with that condensed version of the events that landed Tom and Ruth in the Gateway to the North, I’ll proceed on to my arrival. in North Bay on August 20, 1942. The pamphlet I discovered among my mother’s effects entitled “A Chart for the Guidance of Mothers”, and dutifully filled in by Dr. Butler, our family physician at the time, indicates that I entered the world at the weight of 6 pounds, 6 ounces. I was born about 5:00 in the afternoon, although I have to take my mother’s word for that, since my personal memories are somewhat foggy.

The event took place at North Bay’s Civic Hospital. Originally named Queen Victoria Memorial Hospital, it was a small, gambrel-roofed structure designed to look like a private residence. The building was situated about halfway up a fairly steep hill on Klock Avenue, (subsequently renamed Algonquin). This was Highway 11, the main route leading northward to the mining towns of the northern frontier.

The hospital’s elevated site afforded most rooms with a westerly view, towards the city below, and Lake Nipissing beyond. A view with which my mother became reasonably familiar, for in the custom of that era, she remained there for just over a week! Mind you, in the days before air conditioning, the late August sun would have made her stay pretty uncomfortable I don’t think a name had been selected for me prior to the event, since the chart says merely ‘Master Saunders’, and a telegram to my mother from her sister congratulating her on my appearance, refers to me as ‘Little Joe’ (parentheses hers). I was later told by my parents that my parents had been contemplating calling me Stuart, but decided against it, knowing that in the real world, it’d be truncated to “Stu”.

And had I been born female, they were going to name me “Meredith”- at least fate let me dodge that bullet! So, in as concise a manner as I could, the foregoing outlines the broad strokes of the events that brought my parents, Ruth and Tom Saunders, to the frozen north, and my entry into this earthly sphere. In subsequent chapters, I’ll actually be able to put down my own recollections, and not just regurgitate observations and memories that have been handed down from my elders.

So, in as concise a manner as I could, the foregoing outlines the broad strokes of the events that brought my parents, Ruth and Tom Saunders, to the frozen north, and my entry into this earthly sphere.   In subsequent chapters, I’ll actually be able to put down my own recollections, and not just regurgitate observations and memories that have been handed down from my elders.

I intend talk about the home I lived in for two decades, and then my experience passing through the halls of  learning called elementary and high schools.  Along the way I’ll mention neighbors and friends and places I remember to try and paint a sketch of what it was like growing up in that time and place, touching on events like Christmas and Halloween.  I’ll talk about my recollection of football games and my experience at our summer cottage.  In sum, I’ll try to put down whatever I think is relevant, but try to avoid boring my readers. Please let me know via the email address above as to  how I’m doing, for good or bad!

Let me sign off by encouraging you to put your own memories down on paper.  Do it for  your kids and grandkids and their descendants.

It’s a sad reality that when a person dies, the knowledge of who that individual was dies with them.   Unless you’re a member of the Royal Family, no one knows a single fact about the person who’s passed away.   All that remains is a name.   On a grave marker, perhaps in  a family bible, or sometimes an entry on a family tree.  But that’s it!

In a single generation, descendants have no idea who the person was, where they lived or their view on life.  I’ll bet a majority of people can’t even remember their grandparents names let alone anything about them.

It’s unfortunate that so few people take time to put some words on paper Think how great it would be to read something your great grandmother had written about her childhood.  Even if she wasn’t a great writer, even if she didn’t put down all that much, it would turn her name into a living, breathing person for future generations.

As I said above, the chapters I intend to write are taken from a narrative that I’ve written that sets out on paper my recollections from my childhood growing up in the Bay. I’ll try to keep these chapters in somewhat of a chronological order. Remember, though, that I said “somewhat”! I reserve the right to jump around a bit if it makes sense.

Ian Saunders was born in North Bay in 1942 and lived there for 20 years before a life elsewhere. He has been writing a family memoir and is sharing some of the North Bay connections in Back in the Bay Magazine. Email: iantsaunders2018@gmail.com